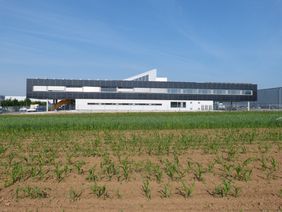 Neuenstadt / Germany, 2 October 2014 – An office and workshop complex with a completely self-sufficient energy supply has been put into operation in Neuenstadt am Kocher (Baden-Wurttemberg, Germany). EnFa – The Energy Factory is not connected to the public grid and solely uses renewable energies. The photovoltaic and storage systems for the off-grid power supply were provided by IBC SOLAR AG, one of the world's leading system houses for photovoltaics. The EnFa is already showing how it is possible for Germany to solely be supplied with renewable energy by 2050.

The complex was completed following a construction period of nine months. EnFa – The Energy Factory will supply the users of the over 350 square metres of production space and approximately 600 square metres of office space solely with renewable energy. There is no connection in place to the public grid. The entire energy centre has been built on a surface area measuring around 30 square metres and represents the core of the self-sufficient building complex.

"The motivation for building the EnFa came from the immense discussion about the feasibility and the financing of the energy turnaround in Germany," explains the project owner and graduate engineer Friedhelm Widmann. "I wanted to show that we are already able to provide a stable and financially viable energy supply which is solely based on renewable energy in 2014. The EnFa is showing today how it is possible for Germany to be supplied solely with renewable energy by 2050." The electricity production costs for EnFa speak for themselves. Depending on how the energy is produced, Widmann expects permanently low prices of between 6 and 20 cents per kilowatt hour (kWh). These costs are considerably lower than the prices German energy providers are currently charging.

Photovoltaics provide 80 percent of energy
The self-sufficient energy supply of EnFa is based on a mix of different power generation and storage methods. A photovoltaic system with 112 kilowatt peak (kWp) ensures consistent energy production throughout the day. The modules used for this purpose have been aligned at the different cardinal points on the roof and on the façade. Solar energy that cannot be consumed directly will be charged into a 400 kWh battery storage system. A combined heat and power plant that has the electrical power of 40 kW and is being fed with biogas will be used if the solar energy is insufficient on days where there is low radiation. Photovoltaic and battery systems have been supplied by IBC SOLAR, one of the world's leading photovoltaic system providers. The share of photovoltaic systems in the overall energy supply of EnFa is at around 80 percent.

As it is not just power that is required for a self-sufficient supply, the offices are cooled and heated using a heat pump. Thus, offices with high room temperatures are a thing of the past: especially during summer when a cooling system is required, the sun shines with high intensity and in doing so supplies the heat pump. On the other hand, if there is not enough solar energy during the winter months to heat the EnFa with the heat pump, the combined heat and power plant will support the system as additional energy supplier.

Sufficient capacity for electromobility
When it comes to using energy, EnFa goes one decisive step further. The company-owned electric vehicles are charged with energy on site using three electric charging stations: "The feeling you get from driving electric cars that are powered solely by renewable energy is fantastic," explains Friedhelm Widmann. And it is cheap: a 100 kilometre journey with the electric car filled with green electricity costs only 85 cents, while the same journey with a traditional petrol-operated car incurs a hefty sum of 9 euros.

Generators and consumers coordinate with one another by using software that was specially developed for this project. The graduate engineer Widmann has incorporated the knowledge he has gained from 20 years of professional experience into this software. The software has access to a weather forecast extending over three days, uses this forecast to calculate the heat and cooling requirements for the building and manages the various room temperature configurations, the use of interruptible loads, the optimised charging of electric cars and the process of stabilising the self-sufficient power network. In a prototype way, EnFa – The Energy Factory shows how a closely linked and intelligent power network should work. Achieving this by 2050, is something Germany should wish for.