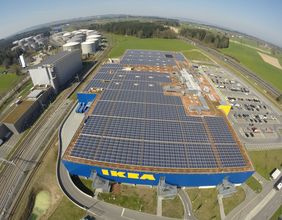 Bad Staffelstein, May 12, 2015: IBC SOLAR AG, one of the world's leading system houses for photovoltaics (PV), and its Swiss partner company BE Netz AG are supporting Swedish furnishing corporation IKEA in planning and installing photovoltaic systems at its locations. At the end of March, the world's largest PV system at an IKEA center was commissioned in Switzerland with a capacity of 1.5 megawatts.

All around the world, IKEA and its products are synonymous with thoughtful planning and highly versatile solutions. The same can be said of IBC SOLAR's photovoltaic systems: as a system house with an international partner network, the company plans and installs individual solutions for companies across the globe. The international furniture store now numbers among these organizations, having commissioned a complete photovoltaic system for the roof of its location in Rothenburg in the canton of Lucerne, Switzerland. Along with 5,840 IBC PolySol CS modules, the German system house also delivered its IBC AeroFix 10 flat-roof mounting system and all other necessary system components.

One particular challenge in planning the project was the roof's low load bearing reserve, especially when taking into account the additional load of of snow in the winter. To reduce the total weight of the photovoltaic system, the aerodynamically optimised IBC AeroFix 10 mounting system was used. Modules were mounted at a flat inclination angle with an east-west orientation. The module array also finishes with a module at the edge of the roof rather than the conventional wind baffles, creating a photovoltaic system with less surface area exposed to wind. As a result, the solar plant requires relatively little additional ballast (less than 5,000 kg) to ensure the necessary stability on the flat roof. Due to its aerodynamic optimisation, IBC AeroFix does not require any screw connections to secure the system to the roof.

The existing green roof was covered with a growth protection barrier to prevent modules from becoming shaded by plants later on. However, no additional protective membrane was necessary, as it is already part of the mounting system rails. With a total peak output of 1.5 megawatts, the modules produce enough solar energy to power around 400 private households, and will save a total of 7,100 tons of CO2 over the next 25 years.

"Sustainability has come to be a matter of course for IKEA, and our stores reflect this attitude as well," said Alexander Gligorijevic, PR Manager at IKEA Switzerland. "By using individually planned photovoltaic systems, we add our part to ensure a green future."

Marius Fischer, Director of BE Netz proudly refers to the project as a joint showcase: “It is with joy that we have been able to realise our largest solar plant in Switzerland to date on the roof of the IKEA store in Rothenburg. At every stage of the project, our cooperation with our partner IBC SOLAR worked very well.” IBC SOLAR not only delivered all system components, but also supported its Swiss partner company BE Netz in planning the plant. Static calculations, system design and on-site consultations were all part of the formula for implementing the sophisticated requirements of such a large scale project.

The electricity produced on the IKEA roof is fed into the public grid since the PV system is operated under the framework of the Swiss “cost-covering feed-in tariff”. However, in addition to the classic grid feed-in, the self-consumption of solar power is also becoming more and more popular in Switzerland and is supported for both private as well as commercial PV with an investment grant.