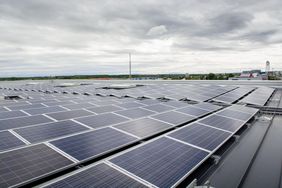 Bad Staffelstein, July 28, 2016 – The Austrian regional subsidiary of IBC SOLAR AG, one of the world's leading system providers for photovoltaics (PV) and energy storage systems, installed two PV systems with a capacity of 509 kWp on the roof of Vienna International Airport. The systems planned by IBC SOLAR Austria were put into operation in July 2016, and will produce more than 500,000 kWh of solar power per year for direct self-consumption.

The installation of PV systems has enabled IBC SOLAR to once again position itself as a strong partner in the solar market. "In the future, around 3,200 m² of environmentally-friendly solar power will be produced at Vienna International Airport," says Heinz Schuld, Project Manager at IBC SOLAR Austria, explaining the output of the photovoltaic system. The two PV systems which were mounted onto the roof surfaces of a hangar and an equipment hall contribute to a climate-friendly and sustainable power supply, and to the continued reduction of CO2 emissions at Vienna International Airport. The direct current produced from the systems is converted into alternating current by inverters, and then fed into the airport network through the nearest transformer stations so that the amount of power purchased from the public grid is reduced.

The aim over the next few years is to build an additional module surface measuring up to 4,000 m2 per year at Vienna International Airport. Further expansionary measures will involve the roof surfaces of existing and newly-built properties being used at the site. The next major project will include equipping the roof of the Air Cargo Center with photovoltaic systems measuring around 5,000 m2, which means that the facility will more than double in size by 2017.

By putting PV systems into operation, Flughafen Wien AG is consistently pursuing its sustainability strategy. This has resulted in CO2 emissions being reduced by around 20 percent over the last three years. The company will also continue to focus on energy efficiency in the coming years and is aiming to achieve significant improvements in the efficiency of power, heat, cooling and fuel consumption by 2022, in order to continue to reduce CO2 emissions. Flughafen Wien AG was awarded with the EMAS Prize 2016 from the Austrian Minister of the Environment for its exemplary environmental management.