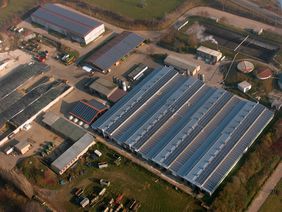 Bad Staffelstein / Germany, November 25, 2011 – One of the largest on roof photovoltaic projects in the free state of Thuringia was inaugurated on November 21st. The State Environment Minister Juergen Reinholz officially inaugurated the solar plant on the roof of the agricultural cooperative of Grossenlupnitz. Maxx-solar & energy installed the 3.000 modules and 42 inverters supplied by IBC SOLAR together with two local craft businesses. The solar plant was installed in just two months following an extensive renovation to remove the asbestos in the roof.

The solar plant makes effective use of 7.000 square meters of roof by producing about 600.000 kilowatt hours of solar energy per year saving 370 tons of carbon dioxide emissions, which would occur if this amount of energy was produced through conventional sources.

Thuringia supports solar energy
“The free state of Thuringia is committed to renewable energies and the number of photovoltaic systems continues to grow”, explained Dieter Ortmann, General Manager of the photovoltaic specialist maxx solar. “However, the potential of the region has not been fully utilized yet. This project effectively demonstrates the benefits of solar plants of this scale in our state.”

As the PV plant was finalized and connected to the grid in 2011, the energy it supplies will be compensated with 25.86 Euro Cent per kilowatt hour. Juergen Reinholz, Environment Minister of the free state of Thuringia, summarized: “The investment in the agricultural cooperative is a leading example for the state of Thuringia and shows that the switch to renewable energy supply is not just a political assignment, but also a mission for companies and citizens. I’m especially proud to see regional partners working together on such a beacon project for the region.”