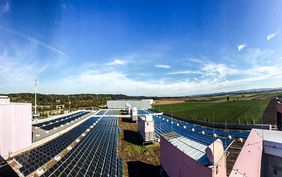 Bad Staffelstein, 12. March 2019 – IBC SOLAR AG, a global leader in photovoltaic (PV) systems and energy storage, has completed a full repowering for the drugstore chain dm and upgraded their PV system on the roof of the combination distribution centre in Weilerswist, North-Rhine Westphalia. The long-term concept of the system provider IBC SOLAR convinced the managers at dm. The faulty thin-film modules were dismantled, disposed of properly and replaced with more than 3,000 monocrystalline high-performance modules. The new system with a capacity of 968 kilowatt peak has been officially in operation since September 2018.

Almost nine years after being commissioned, retailer dm decided to technically enhance the system. Evaluations have previously shown that the performance of the PV system built in 2009 has decreased by almost ten percent each year. Moreover, the system now only performs to 20 percent of its original capabilities. The system operators opted for repowering in 2018 in order to restore the efficiency of the PV system: increased yield and efficiency with the same capacity - engineered, installed and completed in just three months by IBC SOLAR.

The aerodynamic IBC AeroFix mounting system from IBC SOLAR was used to enhance the system. The system enables quick and simple mounting and requires minimal additional ballast. This meant that the load-bearing amount on the roof  decreased by over 80 tonnes compared to the original PV system, which is beneficial for the structure of the building. The installed high-performance modules from the IBC MonoSol brand with a capacity of 310 watt peak also ensure the best possible yield. The figures for the first few months have already been very promising. The new system will feed in almost one million kilowatt hours per year. An E-Smart could circle the earth 100 times with this yield. “It was definitely the right decision to choose repowering. When we installed the original system, PV was in high demand, but the technology had not yet matured in certain areas. Repowering has a lot of potential in this case and offers high efficiency,” explains Kim Nagies, dm system optimisation project manager.

The partnership has only just begun
High and constant yields are also guaranteed for the system operators in the coming years. A maintenance agreement was drafted especially for this purpose which involves the regular examination of yields and constant monitoring. IBC SOLAR will take care of the maintenance and servicing of the system in the future and focus on a long-term and reliable partnership with the retailer. The operator’s expectations of a constant and high system capacity are guaranteed for the next few years in which IBC SOLAR will support the system operators being one of the most experienced providers in the industry.

More information on services and product highlights from IBC SOLAR can be found in Hall A3, Booth 470 and 670 at Intersolar Europe in Munich (15 to 17 May 2019), Europe’s leading trade fair for solar technology.