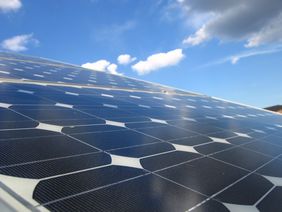 Bad Staffelstein/Ravensburg, 11 May 2017 – IBC SOLAR AG, a global leader in photovoltaic (PV) systems and energy storage, planned and implemented a photovoltaic (PV) system with a total output of 20 kWp on the roof of a residential building in Weingarten (Baden-Württemberg) as part of a tenant electricity project in conjunction with its Premium Partner DEHM ug. The operator and investor of the system is Technische Werke Schussental GmbH & Co. KG (TWS) from Ravensburg. The solar power generated is generally used by the tenants and provides them with access to environmentally friendly and inexpensive green electricity produced domestically.

The PV system was mounted on the roof of a cross-generationally rented housing project by Bau- und Sparverein Ravensburg eG, which consists of 30 residential units. The TWS primarily offer the generated solar power to tenants at a discounted rate. They are not obligated to purchase it, yet all tenants of the housing project in Haasstraße decided to purchase the solar power. The model provides the tenants with access to locally produced solar power, which is otherwise mainly reserved for property owners.

The system that was implemented with an east-west alignment consists of a total of 68 IBC MonoSol 295 VL4 PV modules from the IBC SOLAR product line. The IBC AeroFix 10-EW assembly system was used due to its high static requirements. This system is especially suited for roofs that may only be subjected to a limited load.

The expected annual yield of the system is 17,300 kWh, of which 15,300 kWh are planned for internal consumption. This corresponds to around 50 percent of the electricity needed by tenants; the rest is covered by green electricity from TWS. Any solar power produced in excess is fed into the public grid, according to the German EEG 2017.

The PV system in Weingarten is a pilot project for TWS in the tenant electricity model. The company invested around 35,000 euros into the system, which is part of an overall concept – the property was produced in a wooden hybrid construction and is considered a zero-energy building.