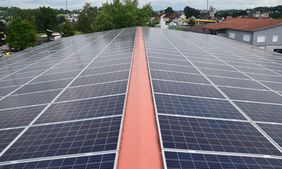 Bad Staffelstein / Germany, November 28, 2017 – IBC SOLAR AG, a global leader in photovoltaic (PV) systems and energy storage, has installed a 95 kWp PV system on top of a production hall of the Regler printing centre in Altenstadt an der Waldnaab (Upper Palatinate) together with its partners Krisch Energietechnik GmbH and DHYBRID. The desire for maximum independence from the electricity supplier and the associated decrease in high energy costs were the crucial factors for the printing house in terms of the solar energy system.

Regler printing centre is one of the leading technical specialist printing houses in Germany and prints almost everything except paper. Aside from conventional screen and textile printing, the company primarily focuses on high-quality large format digital printing for example for advertising signs, banners and trade fair systems. Up to now, during production times, a diesel generator covered the very high power consumption of about 350,000 kWh per year. This resulted in the printing plant making itself independent of the local energy provider and also meant that it could use the waste heat from the generator to heat the production halls and generate process heat. In summer 2017 the production process was further modernised and prepared for the future. The IBC SOLAR Premium Partner Krisch Energietechnik GmbH installed a PV system with a nominal output of 95.4 kWp on top of one of the halls. The system will reduce the burden on the diesel generator's electricity production from now on.

This means that the PV system will not only significantly reduce the amount of fuel required, but it will also prevent the diesel unit from becoming overloaded due to peak loads. A hybrid controller by DHYBRID is used to connect the solar energy system to the unit. The controller provides the generator with the optimum photovoltaic capacity at all times and ensures that it runs in conjunction with the solar energy system without any interference.

DHYBRID has been a partner of IBC SOLAR since 2016. Both companies have already worked on many projects together, especially in African, Asian and Caribbean countries. Tobias Reiner from DHYBRID: “We have already installed our solutions worldwide, but this is the first time that we are enhancing a commercial diesel generator application here in Europe. We are increasingly noticing that these applications are also in demand here due to the high electricity costs.”

Erich Regler, Managing Director of the printing centre is delighted: “We have been trying to make ourselves independent of connection and purchase costs since 1984. We successfully took the first step with a cogeneration solution back then and we have now found another excellent solution with the installation of the solar energy system. We are therefore once again a technological pioneer in the German printing sector and are also committed to protecting the environment.”