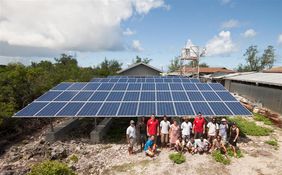 Bad Staffelstein / Germany, March 4, 2013 – IBC SOLAR AG, a global leader in photovoltaic systems, has installed a PV hybrid system with a capacity of 25.38 kilowatt peak (kWp) at Aldabra Atoll (Seychelles). The system has been ensuring the power supply for the local research station for a year now. Aldabra, the largest atoll in the Indian Ocean, is a refuge for many threatened species, both flora and fauna. The atoll belongs to the Seychelles Islands and was designated a natural UNESCO World Heritage Site in 1982.

The Seychelles Island Foundation (SIF) is dedicated to researching and preserving the atoll and therefore runs a research station on Aldabra which is directed by Dr. Frauke Fleischer-Dogley (CEO). Together with the SIF, IBC SOLAR started planning a sustainable energy solution in April 2010 that was intended to supply the research station with electricity. Since its founding in the 1970s, the research station was operated solely on diesel generators. Keeping the atoll supplied with fuel was a major logistical and financial challenge and a constant threat to the fragile ecosystem. “The old diesel generator system was replaced by an intelligent system design with one smaller diesel generator and the newly installed solar system which are now used together as a hybrid solution. This offers the great advantage that the researchers now are provided with around the clock electricity while consuming far less diesel,” explains Alexander Müller, Team Manager Hybrid Power Supply at IBC SOLAR and head of the project. The extended payback time of the overall project costs is eight years. The PV hybrid system alone would amount to a payback time of only three years.

The PV hybrid system at Aldabra is composed of 108 IBC PolySol 235 TE solar modules with a total nominal power of 25.35 kWp, and 96 batteries of the type 12 OPzV.solar 2200 made by Moll, which have a total capacity of 315 kilowatt hours at 48 volts. In addition to planning the off-grid system, IBC SOLAR also supported its installation on site and trained the researchers in handling and maintaining the solar system. By now, the plant has been operating for one year and the noise of the old diesel generators is now a thing of the past.

The project was a logistical challenge for the whole team. After arriving at the main Seychelles port of Mahé, all components had to be transferred to a supply boat and shipped another 1,100 kilometres to the remote Aldabra. “Landing the supply boat  at Aldabra was limited to especially high spring tides. Thus, the timing for the unloading of the system was extraordinarily challenging for this project. 25 tons of equipment had to be manually offloaded in an eight hour time window by the small island community,” said Christina Quanz, project manager of the Seychelles Island Foundation. The system has been running for a year and supplies 95% of the island’s energy needs with solar electricity. Combined with energy efficiency measures the PV system has resulted in diesel savings of 98 percent. The system has therefore realized substantial reductions in operation costs which used to be extremely high due to Aldabra’s remoteness. To date, the system has saved 28,000 kilograms of CO2 emissions. “The team can always rely on a secure and sustainable supply of electricity”, said Frauke Fleischer-Dogley, SIF CEO. “IBC SOLAR has provided outstanding professional support during the project planning, installation and follow-up. The company’s expertise and commitment have been decisive in turning this project into a success story.”

The installation of the solar system is a major milestone in the history of the research station. To mark this achievement, the President of the Republic of Seychelles, who is the Patron of the Seychelles Islands Foundation, will officially inaugurate the system later this year.

IBC SOLAR’s Alexander Müller explains: “With the installation of an off-grid system to produce electricity, we support the researchers’ daily work without tampering with the ecosystem of the island. This way, there was minimal disturbance to the delicate ecosystem and we ensured the autonomous power supply of the station. This allows the scientists to use modern equipment in the research facility for investigating and experiencing the stunning nature of the island.”

To complete this mission, IBC SOLAR had to draw on its in-depth experience with difficult projects. For many years, the company has been realizing off-grid installations throughout the world, including Malaysia, Curacao and India. In this field, IBC SOLAR is offering solar home systems, residential systems, industrial systems and powerful back-up systems.