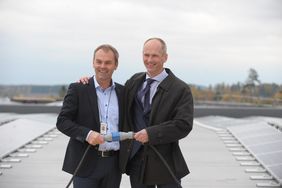 Bad Staffelstein / Germany, October 17, 2014 – Solenergi FUSen AS, Norwegian Premium Partner of IBC SOLAR AG, a global leader in photovoltaic systems, has installed Norway’s largest PV power plant with a capacity of 370 kilowatt peak (kWp). Norwegian Oil and Energy minister, Tord Lien, officially inaugurated the PV plant on the 7th October 2014 in Vestby. The energy produced will be used for self-consumption by the investor ASKO, a leading food logistics company in Norway. The company with 14 sites has set itself the target of becoming carbon neutral. This first PV self-consumption system provided by FUSen and IBC SOLAR represents an important step for ASKO towards achieving this goal.

With this investment ASKO, the largest food wholesaler in Norway, has set a new pace for the introduction of solar energy in all their buildings. The electricity generated by the 370 kWp plant will cover parts of the energy needs of the company’s site, and it marks only the first step for ASKO into solar energy. If the first power plant is a success, there is potential for a tenfold increase at the same location, and also further expansion potential at all the other ASKO sites in Norway. The investment in solar energy is a direct result of ASKO’s as well as its mother company Norgesgruppen's, plan to contribute to a sustainable society and become carbon neutral. The use of solar energy, wind energy and renewable transport fuels are all important measures in order to reach this goal.

“ASKO’s solar power plant is an impressive installation. It will provide valuable knowledge about solar power in Norway. Companies like ASKO guide the way towards the low-carbon society. In this respect, ASKO is a role model for others,” said the Minister. Torbjørn Johannson, Chairman of ASKO states: “Over the next years the ambition is to install sufficient solar energy to cover 20 percent of our energy consumption, and to invest in windmills for the remaining energy need”.

André Tangerud, CEO of ASKO Øst added: “It is exciting to participate in such an important development as solar energy for Norway. ASKO want to be a leader, and it took only nine days from mounting the first system to the actual production of electricity. Furthermore, the site is equipped with sensors and measuring units that will provide valuable data for Universities and Students to further build their expertise in solar energy.”

The solar plant was installed as turn-key installation for ASKO by the Norwegian project manager Solenergi FUSen AS. CEO of FUSen, Thor Christian Tuv, who was in charge of the work, pointed out: “We have been building this power plant with local electricians and roofers. Local competence has been built up, and this paves the way for more projects in the future, both small and large in scale.”

“The opening of the new solar power plant by ASKO which now is the largest in our country has boosted the entire Norwegian solar energy society significantly” says Åse Lekang Sørensen, the General Secretary of the Norwegian Solar Association.

Solenergi FUSen, the leading Norwegian company for solar energy installations, has been developing the project together with its distribution and project partner IBC SOLAR. The PV specialist based in Germany supported the engineering and installation with its over 30 years of experience in solar systems of any size. Furthermore, IBC SOLAR has provided PV modules with a linear performance guarantee of 25 years, the mounting system IBC AeroFix specially developed for flat roofs and other PV components. The joint effort has resulted in a high quality installation that is well equipped for the Norwegian weather conditions, and produces clean solar energy for decades.