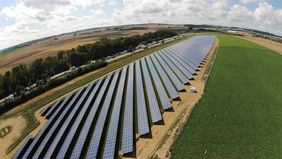 Bad Staffelstein, September 29, 2015 – IBC SOLAR AG, one of the world's leading photovoltaic (PV) system providers, has constructed three turnkey PV power plants for its Premium Partner Main-Spessart-Solar GmbH. The large-scale PV power plants have a combined power output of around ten megawatt peak (MWp) and were connected to the grid within just three months. For the experienced project developers at Main-Spessart-Solar, reliability in implementation was the primary factor in their decision to partner with IBC SOLAR: all of the solar parks needed to be completed as quickly as possible to preserve the highest possible EEG feed-in tariff and therefore maximize returns on the investments.

All three solar parks are located in Lower Franconia in Northern Bavaria. Two solar parks generating 1.4 MWp each were constructed in Schöllkrippen and Mönchberg on rubble disposal sites. In nearby Marktheidenfeld, two areas along the A3 highway were fitted out with solar modules producing a total of 6.7 MWp.

"Having the communities involved was especially important to us, and the response we got was overwhelmingly positive," said Bernd Büttner, Managing Director of Main-Spessart-Solar. "We are especially pleased about the fact that we will be running the largest of the three plants as a community solar park. This way, residents of Marktheidenfeld and the surrounding areas have an exclusive stake in the project," Büttner went on. Quick project completion allowed the investors to secure a high feed-in tariff through the German Renewable Energies Act (EEG), and thus returns of around 6 percent.

All three solar parks followed a tight construction schedule, and were completed and connected to the grid within just three months. Having IBC SOLAR as a partner for the implementation phase ensured that all the plants could be connected to the public power grid as quickly as possible, as was the goal of the project. Thanks to the especially sunny summer in 2015, the plants were generating higher-than-expected yields after just a short time in operation.

IBC SOLAR has more than thirty years of experience in planning and implementing large-scale PV power plants – including not only numerous major projects in Germany, but also installations in India, Japan and around Europe. In addition to its own 50-some community solar projects, IBC SOLAR also acts as an EPC (engineering, procurement, construction) contractor for municipalities, public utility companies and private investors. The system vendor offers its customers a tailor-made package that includes everything from project development support, cost-effectiveness optimization, financial consultation, insurance and construction law to support with grid connection procedures and the direct electricity marketing which most large-scale projects in Germany are obligated to undertake. All of this ensures that operators are on safe ground both legally and economically.