Hotel set to save USD 730,000 in energy costs per year thanks to the new solar power plant 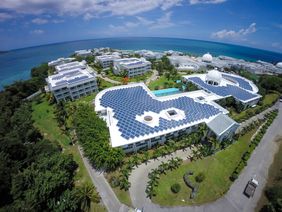 Hanover / Jamaica, June 12, 2014 – SOFOS Jamaica Ltd., a Premium Partner of the German PV system integrator IBC SOLAR AG, has unveiled the largest solar power plant in Jamaica to date. The 1.6 MWp plant intended for own consumption is providing The Grand Palladium Resort & Spa with solar energy. The project represents a total investment of USD 3.4 million by the hotel, which is expected to see a full return on its investments after 4 years and USD 21.9 million in energy savings after 30 years.

The Grand Palladium Resort & Spa is the first hotel in Jamaica to make an investment of this size and is therefore a pioneer for the commercial use of renewable energy. At the official unveiling ceremony, General Manager of The Grand Palladium Resort & Spa, José Morgan, was visibly proud of the project’s successful completion and encouraged other companies to undertake a similar investment: “In the end, it’s a win-win-win solution – your pocket wins, the tourism sector wins, Jamaica as a holiday destination wins.”

The Kingston-based project developer SOFOS Jamaica Ltd. is helping Jamaican businesses become less dependent on the national grid. The plant in Hanover is the first major project for SOFOS in Jamaica and marks a starting point for many other projects in cooperation with different Jamaican companies that will begin soon. IBC SOLAR supported the project developer with its many years of experience in international business and provided solar modules and other components for the construction.

“The Jamaican government welcomes investments in renewable energy solutions,” emphasised the Minister of Science, Technology, Energy and Mining, Phillip Paulwell, at the unveiling ceremony. He told the gathering that solar power will become the cheapest source of energy by 2030 and that Jamaica can continue to benefit from this market trend. The Spanish Ambassador to Jamaica, Her Excellency Celsa Nuño, added that this project makes perfect economic sense for a country like Jamaica with high energy costs: “This project from SOFOS Jamaica redefines Spain’s role as the leading country in renewable energy.”

The Business Development Manager for SOFOS Jamaica, David Pijuan, explained the operation of a self-consumption solar PV system during a tour of the hotel complex. This power plant is the first in the Caribbean with a blocking system that allows the operator to privately consume the power from the solar plant without feeding excess energy to the grid. The PV power systems used by SOFOS Jamaica were specially developed for the Caribbean and are lightweight, low-maintenance and able to resist up to category 4 hurricanes. The PV systems are also equipped with SOFOS’ customised software which allows instant access to information via the internet as well as system error alerts and notifications by email or text message.