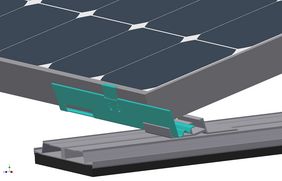 Bad Staffelstein / Germany, May 26, 2015 – IBC SOLAR AG, a global leader in photovoltaic systems, is presenting a new addition to IBC AeroFix at this year's Intersolar from June 10 to 12 (Hall B2, Booth 150). Starting in August, the aerodynamically optimized flat roof mounting system can also be expanded to include a snow load rail, making it safe to use in regions which experience large amounts of snow.

The snow load rails are made of corrosion-resistant stainless steel and are simply inserted between module and support, keeping the module within the manufacturer-specified clamping area. The rail increases each module's maximum load capacity from 2400 to 5400 Pascal. This makes the IBC AeroFix system suitable for regions where its use was previously limited due to heavy snow loads.

The snow load rail is of IBC SOLAR's own development, and has been approved by the module manufacturers for use with all variants of the flat-roof mounting system IBC AeroFix. It is available as a 36" rail for use at the edges of the module array, or as a 66" rail for use within the array. The rail can be installed without using tools, and is available for use with all standard IBC AeroFix supports and for any of the modules in the IBC SOLAR portfolio. The new snow load rail will be available starting in August 2015. Besides developing this new addition, IBC SOLAR is also continuing to optimize materials usage within the entire IBC AeroFix line in order to make the system more economically efficient overall.

The company has also begun offering a practical new cable clip for use in combination with all of its mounting systems. The cable clip holds module connection cables in place and prevents them from sagging down, which can result in damage—especially to the plugs themselves—due to dripping water or contact with the ground. The clip is easy to attach to the supports on the IBC AeroFix flat-roof system, the rails on the IBC TopFix 200 pitched-roof system, or the frames of the modules themselves. It can be positioned as desired to accommodate the cable lengths in use, and replaces the cable-tie attachments commonly used until now. The clip is available for either horizontal or vertical applications.

IBC SOLAR will be presenting its IBC AeroFix mounting system with all of its new features at its exhibit area (Hall B2, Booth 150) at this year's Intersolar Europe, which will be held in Munich from June 10 to 12.