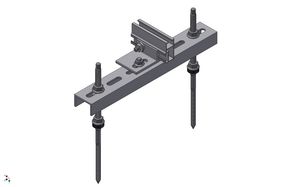 Bad Staffelstein / Germany, August 19, 2014 – IBC SOLAR AG, a global leader in photovoltaic (PV) systems, has now enhanced its tried and tested IBC TopFix 200 mounting system for pitched roofs to include the Mounting Plate Duo. The plate is used in photovoltaic installations on trapezoidal or corrugated roofs and enables more static loads to be supported for each roof connecting point.

Two hanger bolts or two solar fasteners can be connected to each other using the new Mounting Plate Duo. The profile rail on which the solar modules are mounted is then attached to the plate. This enables the installer to fix the profile rails on the roof with twice the number of hanger bolts or solar fasteners. The load of the photovoltaic system is distributed to more points and as a result the burden on the individual screws decreases considerably.

The Mounting Plate Duo can be used to install photovoltaic systems on buildings in exposed locations where there are large loads of wind or snow. This is especially interesting for commercial photovoltaic systems when it comes to self-consumption: Trapezoidal sheet metal or corrugated roofs represent the majority of roof areas that can be used for photovoltaics on agricultural and commercial buildings. The model of commercial self-consumption involves the solar power that is generated mainly being consumed independently and electricity procurement from the public network thereby being reduced. As the price of electricity for small and medium-sized businesses is constantly high and has even risen in recent years, self-consumption of PV generated power guarantees long-term planning certainty: Whoever operates a PV power plant for self-consumption has the security of knowing that electricity is produced over a period of 25 years at constantly low level costs. A low-maintenance mounting system like the IBC TopFix 200 also ensures that the photovoltaic system has a long service life and offers profitability that can be accurately calculated.