3.43 Megawattpeak (MWp) photovoltaic (PV) installation in Niğde has been realised as EPC project 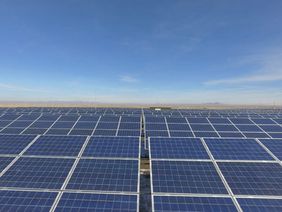 Bad Staffelstein / Germany, August 1, 2017 – The Turkish subsidiary of IBC SOLAR AG, a global leader in photovoltaic systems and energy storage, has completed another large-scale solar energy project with a total capacity of 3.43 MWp in the province of Niğde. The plant will produce 6 million kilowatt hours (kWh) of solar power per year for grid feed-in.

The solar plant has been handed over to the investor, Akım Elektronik. “IBC SOLAR is one of the most reliable EPC companies in the solar market in Turkey and Germany – in both, technical and commercial respects”, said Hasan Duru, owner of Akım Elektronik.

“With the proper design of the PV plant and the good solar irradiation values in the Niğde region, maximum production levels will be recorded. The produced amount of approx. 6 million kWh solar power per year will prevent the release of around 4.000 tons of CO2”, said Bülent Yildiz, General Manager at IBC SOLAR Turkey.

Niğde, is the third large-scale project, which IBC SOLAR Turkey has commissioned since the beginning of the year. The projects in Gaziantep (5.9 MWp) and Eskişehir (1.1 MWp) are already in operation, and two other plants in Izmir (4.2 MWp) and Adana (4.8 MWp) are soon to follow. For all of its projects, IBC SOLAR Turkey has referred to its large network of local franchise partners, which are spread all over the country. This enables the company to implement several projects simultaneously, as well as guarantee maintenance work after implementation.

“Our project pipeline, which started mid-2016, is about more than 100 MWp. We have already commissioned 40 MWp and will continuously put the other projects into work until the end of this year”, says Hakan Daltaban, Managing Partner of IBC SOLAR Turkey.