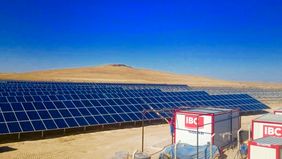 Istanbul, December 2, 2015 – IBC SOLAR Turkey has completed a photovoltaic power plant with a nominal output of 1,114 megawatt peak (MWp) in the province of Kayseri. The customer FIT Enerji Yatirimlari AS is a leading Turkish investment company in the renewable energy sector. The open space project was jointly developed by both companies.

The power plant, which spans two hectares, was completed in just a few weeks in the late summer of 2015. IBC SOLAR Turkey took on all planning and procurement tasks as an EPC contractor and was also responsible for the construction of the plant. A total of 4,400 polycrystalline IBC PolySol CS Value-Added Modules, each with a nominal output of 260 watts, and 17 string inverters each with 60 kW of SMA were assembled. The substructure was delivered by Schletter. IBC SOLAR Turkey will also be responsible for the maintenance, servicing and monitoring of the solar power plant in future.

"We are proud to have completed this first solar power plant together with IBC SOLAR Turkey and are excited to be putting further joint projects into operation in the coming year," says Yiğit Ural, CEO of FIT Enerji Yatirimlari AS. "With IBC SOLAR, we are relying on a partner with more than 30 years international experience in the construction of solar power plants. We are setting new standards as far as the performance and efficiency of solar power plants is concerned as we deliver quality and reliability in planning, components and design. The project will promote awareness of the commercial and environmental benefits of using solar technology in the emerging Turkish photovoltaic market," Ural firmly believes.

With its above-average irradiation levels, the Central Anatolia Region is ideally suited for the production of climate-friendly solar power. It is expected that the solar power plant built in the vicinity of the village of Güzel Öz will produce 1.8 gigawatt hours of electricity in its first year of operation. This power will be fed into the public power grid and will benefit from the feed-in tariff of 0.133 USD/kWh over the next 10 years. The high level of dependency on gas and oil imports currently seen in Turkey can be significantly reduced through the development of solar energy projects.

"We are convinced that the way has been paved for Turkey to become the next important growth market for photovoltaics in Europe," says Hakan Daltaban, General Manager of IBC SOLAR Turkey. "IBC SOLAR Turkey is ideally positioned to satisfy the growing demand for clean, renewable energy and also to meet the profitability expectations of investors." IBC SOLAR Turkey currently has a pipeline of approx. 50 MW and plans to create projects totalling 100 MW in Turkey in the next two years.