Project with 18.5 megawatt peak is being built on a slag heap 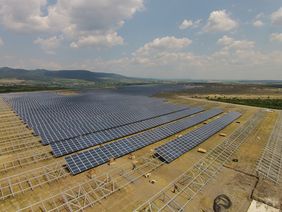 Bad Staffelstein / Eisenstadt / Visonta, July 9, 2015 – IBC SOLAR AUSTRIA has begun work on Hungary's largest ever photovoltaic power plant. The project with a nominal output of 18.5 megawatt peak (MWp) is being built in the immediate vicinity of the lignite-fired power plant Matrai Erömü.

In a few weeks’ time, the slag heap of the Matrai Erömü power plant measuring 30 hectares will be covered by 72,480 solar modules and connected to ten central inverter stations. The largest coal-fired power plant in Hungary will then have the country’s largest ever photovoltaic plant as its neighbour. The client for this unique combination is Matrai Kraftwerk AG, of which the German company RWE holds a 50 percent stake.

Logistical challenge
IBC SOLAR AUSTRIA is responsible for the technical development, component procurement and construction of the photovoltaic plant along with the Romanian EnergoBit Group and the Hungarian company Wire-Vill Energetics. Transporting the material to the 70-metre high plateau presents a significant logistical challenge. It was therefore necessary to purpose build a private construction site access road.

Test operation from August
After the construction work has been completed, the PV power plant will be able to supply about 10,000 average Hungarian households with electricity generated from solar energy each year. The six-week test operation of the plant will begin in August 2015. The contract for the construction of the megawatt power plant in Hungary is the largest individual project in the history of the internationally active IBC SOLAR AG and its foreign subsidiaries.

IBC SOLAR has over 30 years of experience in the photovoltaic industry. The German system service provider has been successful both as a solar systems distributor and as a project developer and general contractor for many years. In this role, the company has been responsible for constructing a number of megawatt photovoltaic power plants worldwide, including projects in Germany, Italy, Japan, Portugal, Spain, India and Malaysia.