The German system house will address the importance of international projects and exhibits with the EnergieAgentur.NRW from October 28th to 29th 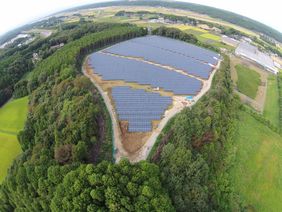 Bad Staffelstein / Germany, October 22, 2015 – IBC SOLAR, a global leader in photovoltaic (PV) systems, will once again attend the REIF Trade Fair in Fukushima. The German solar system provider will showcase its expertise in project development and international trade business by presenting its services at a booth shared with the German EnergieAgentur.NRW (Hall C, Booth J-24).

After the successful implementation of its first four projects in Japan, IBC SOLAR plans to further develop its business activities in the country. The German PV expert is currently working on the implementation of a two MW EPC-project, while also planning two additional projects, which will start within the next few months.

IBC SOLAR currently holds project rights for more than 50 MW in Japan and wants to further expand its project pipeline. To help achieve this ambitious goal, the company founded the subsidiary IBC SOLAR Projects KK in Tokyo in August 2015.

“We are very excited to participate at the REIF Trade Fair in Fukushima,” says Juan Pedro Naranjo, Managing Director of IBC SOLAR Projects KK. “As we strive to drive our growth strategy in Japan forward, we are eager to strengthen our relationship with our local partners.” IBC SOLAR is aiming to consolidate a total project pipeline of 100 MW in Japan during 2016 and 2017. At the same time, the company is discussing with different potential equity investors the possibility of them becoming partners in the current project pipeline.

IBC SOLAR considers Japan as a key market when it comes to strengthening its international growth strategy. The company is committed to realizing big investments within the next two years in Japan. “IBC SOLAR feels very comfortable investing in the Japanese market as we have already gained a good understanding of the country,” says Antoni Beltran, Director of Project Business Development and Investment Sales of IBC SOLAR AG.

IBC SOLAR will attend the REIF trade FAIR in Fukushima, from October 28th to 29th at Hall C, Booth J-24.