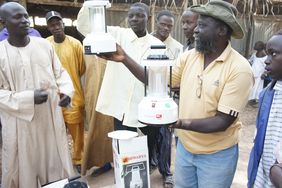 Germany, Bad Staffelstein, August 16, 2011 – IBC SOLAR, a worldwide leading photovoltaic specialist, has equipped three schools in Senegal with 500 portable solar lamps, as well as vouchers for the charging of the lamps with solar energy. Students will receive charging vouchers for special merits in school. The project that was realized together with KAЇTO Projekt GmbH, a German based specialist for sustainable investments in Africa, aims to spur the rural electrification while at the same time raising the awareness of renewable energies among the local population.

One of the main challenges in the region of Casamance in southern Senegal is the lack of energy supply. Only one in three of the 12 million inhabitants of Senegal are connected to the grid. In rural areas it’s only one fifth of has access to the public power supply. Inhabitants usually use diesel engines to generate the power they need which is a burden for the environment and the population.

In order to improve the electric power supply, IBC SOLAR and KAЇTO have supplied the area with solar lamps and have handed out charging vouchers to schools. Only two lamps are needed to illuminate a standard household in Casamance, as most of the family life takes place in one large room.

The solar lamps project is the second phase of the joint project of IBC SOLAR and KAЇTO. In 2009 the two companies installed solar kiosks in rural areas in Senegal which are equipped with solar modules which generate solar energy. These kiosks are run by a villager who charges mobile phones, electronic devices or lamps for a small fee. So far, three solar kiosks have been installed and more are to follow soon.

To increase the usage of renewable energy supply, teachers hand out vouchers every week to pupils as a reward for their achievements in school or for voluntary social services. With these vouchers pupils can charge their lamps free of charge at one of the solar kiosks. One battery load lights the lamp for about seven hours.

For the duration of this school year, three schools with 250 pupils each can hand out a total of 15.000 vouchers and thus make attending school more attractive. In order to have a control over the allocation of the vouchers, teachers are asked to explain briefly the merits that they reward. So instead of handing out to all and sundry, vouchers have to be earned. This ensures that the new technologies are being valued among the population.

“We encountered several challenges in the course of the project”, explained Heidi Schiller, General Manager of KAЇTO Projekt GmbH. “First of all, we had to convince the villagers of the merit principle. The population in this region of Senegal has a strong community spirit and tends to allot the same standard to everyone, even if it is quite low. So a great deal of convincing had to be done”, continued Heidi Schiller.

Udo Moehrstedt, Founder and CEO of IBC SOLAR added: “Today about 2.5 billion people globally live without electricity. However, electricity is the fundamental basis for the economic growth of a country. The solar lamps project in Senegal is a prime example of decentralized power supply: the electricity is generated where it is used. Photovoltaic is the ideal power supply, as the solar energy is abounding in this area. The systems are low in maintenance and can supply even the most remote area with electricity.”