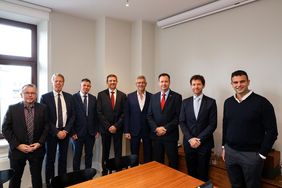 “The signing of the contract is the kick-off of our joint project activities with Afcon, which may be extended to other countries as well,” said Patrik Danz, Chief Sales Officer (CSO) of IBC SOLAR AG. “The sale to Afcon is only a part of our project development in Poland, which comprises more than 600 MW and is being continuously expanded.”

The agreement with Afcon underlines IBC SOLAR’s expansion of business activities in Poland. The company has recently founded a new subsidiary in Poland and has thus expanded its local capacities.

“As a full-service provider IBC SOLAR is an experienced partner for renewable energy projects from the development and turn-key realisation, up to the operation and maintenance. And this applies not only to the solar park sector, but also to the residential sector, in which we have been successfully active in Poland for several years. As well as for the commercial and industrial sector in roof-top or adjacent installation with energy management solutions, in which we are focusing our activities today”, explains Wojciech Prokopowicz, Managing Director IBC SOLAR Polska.

Renewable energy is gaining increasing attention in Poland. The countries’ electricity market is the largest in Eastern Europe, and one of the developing markets in Europe. There is a declared aim to reduce the carbon footprint according to the adopted EU regulations which leads to a rapid transition of electricity generation in the country. Polish government aims at more than 30% electricity production from renewable energy by 2030, reflecting a growth of over 50% in less than a decade.

Israel Raif, Chairman of Afcon said: "We are very pleased about our cooperation with IBC SOLAR. These two projects are a significant addition to our portfolio of projects in general and in Poland in particular. Afcon is continuing to invest in unique large-scale solar projects and this acquisition will position us as a significant player in the renewable energy market in Europe."