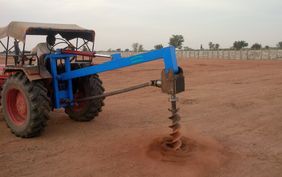 Bad Staffelstein / Germany, February 10, 2015 – IBC SOLAR AG, a global leader in photovoltaic (PV) systems, has started building another megawatt (MW) plant in cooperation with its Indian subsidiary IBC SOLAR Projects Private Ltd. The company received the order to implement the Pokhran turn-key solution with an output of 11 MW as follow-up order of a successful project realised at the end of 2014. IBC SOLAR will also attend the RE-INVEST trade fair in New Delhi from 15 to 17 February to strengthen its position in the local business culture.

The Pokhran project is built in the sunny state of Rajasthan in North-West India, as was the case with the Bhadla solar power plant handed over to the investor as a turn-key solution at the end of October 2014. Once again, the client and investor is a company from LN Bangur Group. The construction of the new 11 megawatt project is the fifth megawatt power plant  implemented by IBC SOLAR as an EPC service provider in India. The German system house provided engineering services and technical supervision, while the Indian subsidiary is responsible for the construction work on site. The plant is scheduled to be connected to the grid at the end of March.

Given the topographically challenging conditions in India, IBC SOLAR has decided to employ a customised power plant design to ensure the highest possible quality and a high total return for the investor. The soil in the Pokhran construction site used to be a seabed consisting of sand and lime sediment. In order to protect the foundation against corrosion caused by the salt, the metal foundations will be covered in an additional concrete layer. The groundwater in Pokhran is also extremely salty and can therefore not be used for the subsequent cleaning of modules which is regularly required in India in order to secure the forecast yields. That's why a desalination plant will be installed for the subsequent technical operation and maintenance (O&M).

Flood control is also an important issue in Pokhran to ensure a safe operation of the plant over the next 20 to 25 years. The terrain is therefore crossed by a 29 feet wide water ditch in East-West direction, referred to as Nallah. It has been installed to drain the high levels of water during the rainy season. Electronic components such as transformer stations and central inverters will be mounted about 30 to 40 inches high to provide additional flood protection.

The project is funded by JNNSM (National Solar Mission). Components being used are therefore produced in India, such as mounting systems, modules, and some electrical parts.

IBC SOLAR will attend the "Renewable Energy Global Investment Promotion Meet & Expo" (RE-INVEST) trade fair in New Delhi from February 15 to 17, 2015. Experts from the German EPC contractor and its Indian subsidiary will be on site to talk with visitors at the joint stand for the renewable energy export initiative of the Federal Ministry of Economic Affairs (German Pavilion, booth 56.10).

RE-INVEST 2015 is organised by the Indian Ministry for New and Renewable Energy (MNRE) and directly addresses investors, project managers and financiers. The government aims at increasing the use of renewable energies for power generation up to 55,000 MW by the end of 2017.