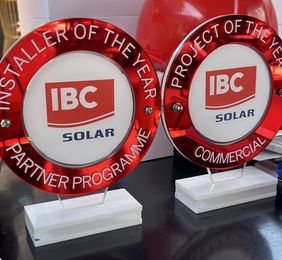 Johannesburg / Cape Town, December 2021 – IBC SOLAR South Africa (Pty) Ltd, subsidiary of IBC SOLAR AG, a global leader in photovoltaic (PV) systems and energy storage held their Year-End Functions this month, where they announced Premium Partners 2021 awards such as ‘Installer of the Year’ and ‘Project of the Year’, among others. It is the third consecutive year that IBC SOLAR South Africa has honoured its closest partners.

IBC SOLAR South Africa held their annual year-end events at two outside venues in Johannesburg and Cape Town in-line with COVID regulations, during December 2021. Daniel Haitzler, Managing Director of the company awarded the best and loyal clients with Premium Partner Certificates for their long standing cooperation and great work. “An IBC SOLAR Premium Partner is not only assessed by a certain level of sales volume but by the number of complete systems and the frequency of business interactions with us throughout the year. The success comes from partnership and that is what we are targeting with our clients to build a win-win relationship for all of us”, Haitzler points out. “Our Premium Partners are exactly that”.

In addition to the Premium Partner Certificates, the client Ultimate Solar in Johannesburg was awarded “Project of the Year Residential” for their impressive Solar PV System installed at a KZN farm. 50 kWp of LONGi PV modules, two Fronius Symo 20kWp inverters plus Victron charge controller connected to three Victron Quattro 48/15000VA with nine 7,4kWh Solar MD Li-Iron batteries to provide up to 60 kWh of usable backup power. Darryl Claassen from Ultimate Solar can be seen accepting his Project of the Year Award: Residential from Daniel Haitzler, MD of IBC SOLAR, in the pic 1 below.

In turn, the “Project of the Year: Commercial” went to Motla Consulting Engineers (Pty) Ltd in Cape Town. Motla, with their group of collaborating Engineers, completed a 518 kWh battery project with SolarMD connected to 12 Victron Quattro 48/15000VA for a training institution in the Western Cape. The project provides backup power plus energy savings. It was realized in cooperation with engineering and commissioning support of SolarMD and IBC SOLAR. Solar PV is likely to follow for the application in 2022.
The “Installer of the Year Awards" went to Gronn inGauteng, Windstrom S.A. and Namaqua Solar for the Western Cape. All three customers have come a long way with IBC SOLAR, are highly skilled and experts in their field. They have installed and commissioned numerous systems by using the whole range of IBC SOLAR’s product portfolio. Pic.2 below shows Filip Wolfs, from WINDSTROM S.A.in Swellendam, receiving IBC SOLAR Installer of the Year Award from Alexander Joist. This is his second consecutive win. In Pic.3, Philip Van Wyk from Namaqua Solar can be seen accepting his award from Alexander Joist, Business Development Manager at IBC SOLAR South Africa.

Furthermore, the long standing client, Solsquare in Namibia, was awarded with the “International Installer of the Year Award”, presented to customers in the export markets. For the first time, IBC SOLAR also awarded their best service partner among their network. The prize went to the Centurion-based Sector Solar, who was awarded with the “Service Partner of the Year” award for outstanding service and collaboration.

In an ever-growing industry, there are always new dynamic role-players to watch. One such role-player is EnergyON in Roodepoort – this year’s “IBC SOLAR Newcomer of the Year”. EnergyON originally operates in Telecommunication technology. Now, the company has started to move into Solar PV. Over the last six months of 2021 alone, they installed 1MWp of solar PV and look into an excellent pipeline for 2022 as well. The three Maree Brothers, Directors of EnergyOn, can be seen accepting the 2021 Newcomer of the Year Award from Daniel Haitzler, MD of IBC SOLAR South Africa below (Pic.4).

2021 has been considered a recovery year of COVID but it came with additional challenges in respect of commodity pricing and worldwide logistics turbulences. IBC SOLAR South Africa managed to grow their track record and further strengthen their market position in the Sub-Saharan region.