4.24 MWp solar plant in the province of Mersin is one of the largest rooftop installations to date 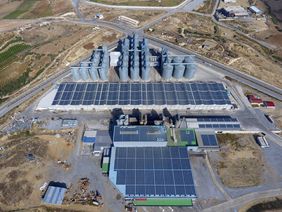 Bad Staffelstein / Germany, January 15, 2018 – The Turkish subsidiary of IBC SOLAR AG, a global leader in photovoltaic systems and energy storage, has commissioned a turn-key solar energy project with a total capacity of 4.24 MWp in the province of Mersin. The project is one of the largest rooftop installations in Turkey and is setting quality standards for this type of PV installation. The plant has already been handed over to Tiryaki Agro Company, a sector leader for the processing of grains, seeds and other agricultural products.

Hakan Daltaban, the Managing Partner of IBC SOLAR Turkey, stated: "We are proud to be part of one of Turkey's largest commercial rooftop solar projects. In this sense, we extend our gratitude to the Tiryaki Agro company, who preferred us in their tender". The Tiryaki PV plant can be considered as a pioneering project: In near future, large-scale rooftop PV projects will become more important in Turkey, especially regarding increasing prices for electricity and the options of commercial solar self-consumption.

The project's design and installation was carried out by Turkish and German engineers under the technical controllership of the Fraunhofer ISE Institute. In addition, the project partner Deloitte provided commercial consulting during the tender phase.

Regarding the technical challenges in designing and installing the PV power plant, Bülent Yildiz, one of IBC SOLAR Turkey's General Managers, says: "The membrane sections of the roofs underwent special construction. Therefore, procedures like drilling and screwing were not applied and the PV plant was installed without penetrating the roof skin”. In addition, a significant number of modules was constructed in an East-West orientation, which means that only a minimum ballast is required in the peripheral areas. This demonstrates an advantage in terms of the diminishing static reserves of industrial buildings. Furthermore, the system’s  orientation allows optimal use of the available roof surface. To guarantee highest standards during the whole process, the project was run under the sensitive controllership of the Fraunhofer ISE Institute from start to hand-over.

The now commissioned 4.24 MWp represent the project's first phase. The entire project amounts to a total of 15.6 MWp, roof-mounted and ground-mounted.