PV system on the roof of a logistics building produces around 1.66 million kWh of solar power a year 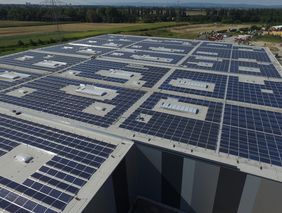 Bad Staffelstein, 6 December 2016 – AVANTAG Energy s.à r.l, a Premium Partner of IBC SOLAR AG, has installed a photovoltaic (PV) roof-top system on a logistics building of the real estate group VGP in Bobenheim-Roxheim (Rhineland-Palatinate). The joint investors and operators of the system are the energy providers Enovos and EnergieSüdwest. The PV system with a total output of approx. 1.8 MWp will generate around 1.66 million kWh of solar power each year, which is fed entirely into the public grid. The system will be put into operation in 2016 in accordance with the Renewable Energy Law (EEG).

AVANTAG Energy opted for the aerodynamic IBC AeroFix 10-EW mounting system as the roof’s load reserve and the permitted surface pressures were limited for the insulation. Apart from the low ballast requirement, the ease of installation was a decisive factor when choosing the system. It was also constructed in an East-West orientation, which means that only minimum ballast is required in the peripheral areas. This demonstrates another advantage in terms of the diminishing static reserves of these industrial and commercial buildings. The orientation of the system further allows for optimal use of the available roof surface while lowering the overall costs of the system and therefore the production costs of solar power thanks to the low material and space requirements.

In addition to the IBC SOLAR mounting system, 6,828 IBC PV modules were also installed, which each have an output of 265 Wp. The system was initially planned and implemented for a full feed-in to the public grid. The tenant of the site is able to switch to self-consumption at a later date, but this is not an essential requirement. Thus the tenant has maximum flexibility when it comes to purchasing electricity and the investor a secure basis for calculation.

The solar power is fed directly from the building into the grid of the responsible energy provider, Stadtwerke Frankenthal, and directly sold. The electricity produced will cover the requirement of around 500 households and will save approximately 18,000 tonnes of harmful CO2 in the first 20 years of the system operation alone.