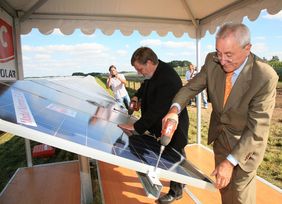 Sukow / Bad Staffelstein (Germany), September 6, 2011 – Volker Schlotmann, Minister of Transportation, Construction and Rural Development in the state of Mecklenburg-Vorpommern (Germany), and Udo Möhrstedt, CEO of IBC SOLAR, today installed the final module of the Sukow solar park. The photovoltaic project is located close to the state capital of Schwerin on a total area of 31 hectares. The solar park will be connected to the grid and begin operation by the end of September. At an annual output of approximately 10.5 million kWh of ‘green’ electricity, the PV plant will be able to supply an equivalent of 3,683 households, eliminating some 6,100 tons of CO2 emissions. On his visit to the PV project, Minister Schlotmann learned more about the next steps required for the scheduled start-up of the solar park in autumn.

The solar park is being built on a former landfill site at Sukow next to a railway line. As the general contractor, IBC SOLAR is responsible for planning, delivering and building the power plant. As the operating company will be based at Sukow, the municipality of Sukow will fully benefit from the future trade taxes.

Installation works began in May, 2011. Following the mounting of the modules, connection works will now start. Residents of Sukow and its surroundings will have the opportunity to buy shares of the new solar park. At a minimum deposit of 5,000 Euros, they can invest in renewable energies. IBC SOLAR will start marketing the solar fund in early 2012.

Udo Möhrstedt, founder and CEO of IBC SOLAR, added, “In Mecklenburg-Vorpommern, IBC SOLAR has already connected three solar parks to the grid. The Sukow solar park is an additional project contributing to the ongoing energy transition in Germany. By marketing the facility as a ‘Citizen Solar Power Plant’, we are enabling local residents to invest in solar energy and to make their contribution to the creation of a sustainable electricity supply.”