The installation will go into operation in August 2011, only three month after the ground-breaking ceremony 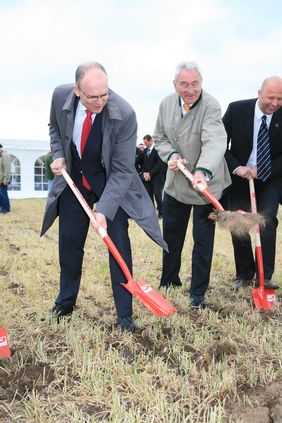 Bad Staffelstein/Sukow, Germany, May 19, 2011 – With a ground-breaking ceremony on May 17, photovoltaics specialist IBC SOLAR officially started construction works at the site of the Sukow Solar Park in the German state of Mecklenburg-West Pomerania. The solar park covering a total area of 31 hectares is planned to be completely installed in August, 2011. With an effective output of slightly more than 11 MWp, the solar park will be among the largest installations in the region. The plant will generate electricity for approximately 3,700 households while saving about 6,100 tons of CO2 emissions annually.

Located in the municipality of Sukow, close to Mecklenburg-West Pomerania’s capital Schwerin, the solar park demonstrates its suitability for PV installations, despite being located in the north of Germany. According to studies of the “Deutscher Wetterdienst” (German Meteorological Service), this region experienced constant irradiation values of almost 1,000 W/m² in the last 20 years. These results are confirmed by an energy-yield survey commissioned by IBC SOLAR.

The solar park will be built on the former Sukow landfill as well as next to the Schwerin-Crivitz railway line. IBC SOLAR‘s solar-funds department was responsible for purchasing the property and project development. In the upcoming weeks, IBC SOLAR will install 48,000 PV modules. Once the solar park is connected to the grid, the modules will generate approximately 10,500,000 kWh of electricity per year. Residents in the region of Sukow will have the opportunity to invest in the plant by buying shares of the solar fund. In addition to receiving solar-generated electricity, they can thus also actively contribute to the transition towards renewable energy supply. IBC SOLAR plans to market the solar fund in November 2011.

Breaking the ground of the construction site, Prime Minister of Mecklenburg-West Pomerania Erwin Sellering said, “It’s is our goal to actively push the expansion of renewable energies in order to create future-proof jobs and add value by locally producing energy. The Sukow Solar Park is a prime example of how residents and municipalities in Mecklenburg-Vorpommern can directly benefit from the expansion of renewable energies.”

Udo Möhrstedt, founder and CEO of IBC SOLAR, added, “Recent developments clearly demonstrate the need to switch to a renewable energy generation. With solar parks like these, even residents without a roof of their own have the chance to drive the expansion of renewable energies.”