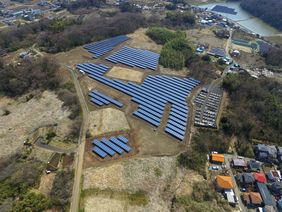 Bad Staffelstein / Germany, June 7th, 2017 – IBC SOLAR Energy, the International Project Development division of IBC SOLAR AG, a global leader in photovoltaic (PV) systems and energy storage, continues to strengthen its presence in Japan. The company has installed two solar systems with a total capacity of 3.5 MWp in the prefectures of Saitama and Ibaraki.

In May 2017, IBC SOLAR completed the construction and grid connection of another two PV projects in Japan, 1.75 MWp each, located in the cities of Hiki (Saitama Prefecture) and Ishioka (Ibaraki Prefecture). The ground mounted solar plants, also developed by IBC SOLAR along with its Japanese partners were granted a comparatively high FiT of Yen 32 and Yen 27 per kWh, respectively. Both projects have been sold to the investors BRUC Capital and Macquarie Capital on a turn-key basis, as part of the framework agreement signed by both parties comprising 37 MWp of PV parks in Japan. The agreement with BRUC Capital and Macquarie Capital also includes preferential rights to acquire IBC SOLAR’s broader pipeline of solar projects in Japan for the next three years, estimated at up to 150 MWp in additional capacity.

“Since IBC SOLAR started its operations in Japan in 2014, we have focused on the market segment of projects up to 2 MWp and are currently working on a consistent pipeline of over 70 MWp with secured feed-in tariff. By the end of the year IBC SOLAR will have successfully developed, built and sold to private investors over 25 MWp of installed capacity in the country”, says Juan Pedro Naranjo, Managing Director of IBC SOLAR Japan. “We always assume the leadership of every single project, providing one-stop solar solutions to our investors as a combination of local market knowledge and international experience”.

IBC SOLAR enlarged its scope beyond the traditional position as EPC contractor by moving upstream in the value chain as an International Project Developer. Besides Japan and as part of its strategy to offer long-term bankable investment opportunities in solar to its customers, IBC SOLAR is currently developing projects in India, the Philippines, Vietnam and other countries inside the Asia Pacific region with over 400 MWp of large scale plants under development to date.