IBC SOLAR celebrates the completion of a project that reinforces its international presence. To bring this about, the Portuguese company Sol Selvagem relied upon IBC SOLAR’s experience as an EPC contractor. 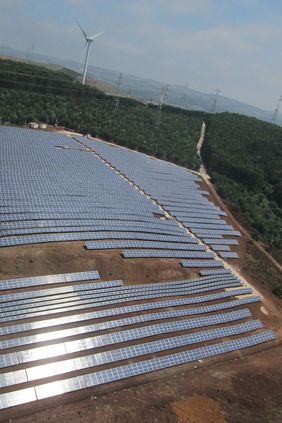 Lisbon / Portugal, November 26, 2013 - IBC SOLAR, a global leader in photovoltaic systems, has developed an important turnkey project for Sol Selvagem in Fanhões, Portugal, with the collaboration of Inempi. The Head of the Local Council, António Dias Emidio, who attended the event as guest of honour, expressed his gratitude to the companies involved in this pioneering project for the region.

The solar plant As Galegas has a total nominal output of 2.3 megawatt peak (MWp). For this, 9,600 polycrystalline modules of the type IBC PolySol 240MS were installed. With an estimated annual production of 3,500 megawatt hours (MWh), the photovoltaic power plant can supply clean electricity to about 1,500 families, with a saving of approximately 1,640 tons of environmentally harmful CO2 emissions.

As Galegas is the result of an initiative born from a serious commitment to the environment, a professional direction with extensive experience in photovoltaics and rigorous project execution. It is therefore an operation in which the involved companies Sol Selvagem, IBC SOLAR and Inempi took their professionalism as the seal of identity for their business collaboration.

António Dias Emidio, President of the Municipal Council of Fanhões-Loures and guest of honour at the inauguration, expressed his gratitude: "Since this is the first photovoltaic project in Fanhões, and considering the benefits that this initiative brings to the economy and environmental quality of the locality, I can only thank Sol Selvagem, IBC SOLAR and Inempi for the commitment they have shown."

Rudolf Sebald, Vice President and Project Manager at IBC SOLAR, stated that: "We are very pleased with this project, our first turnkey project in Portugal. It has been successful work, complying with both timing and estimated costs, and also with plant performance, which exceeds even the electricity production agreed with the owner. This project confirms the growing business of IBC SOLAR internationally."

Joâo Marinho of Sol Selvagem thanked the municipality of Loures for their entire collaboration and added: "When we first thought about such an investment in a photovoltaic project, few months ago now, I knew I had to count on a committed company that could offer the maximum guarantees for optimal results. With more than 30 years of involvement in solar systems technology, IBC SOLAR’s experience was crucial for this project. After these months of flawlessly handled work, I can now confirm that the plant’s positive results month after month undoubtedly correspond to a job well done.”