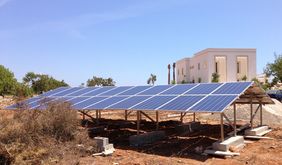 The most recent assignment of IBC SOLAR Premium Partner swiptec from Leipzig, Germany (a company specialising in independent power supply) in the summer of 2013 took workers to one of the most popular holiday destinations: they were tasked with installing a grid-independent power supply at two newly built, private holiday fincas without public grid connections in the Mallorcan hinterland. The team implemented a stable and environmentally friendly solution thanks to a hybrid system consisting of a PV power plant, battery storage unit and a diesel generator as backup.

IBC SOLAR AG supplied closely coordinated components of the highest quality for the setting up of the plants. Engineers and technicians at IBC SOLAR also gave their support during plant design. The two identical PV hybrid systems each consist of 120 IBC PolySol type modules with a nominal power of 28.8 kWp, 24 Moll OPzV 3010 type batteries and a 40 kVA diesel generator. The systems supply the fincas with electricity 24/7 while consuming only a minimum of diesel. Amongst others the electricity is used to operate heat pumps for the domestic and pool heating systems.

PV hybrid solutions offer crucial advantage compared with pure diesel systems: the diesel consumption is reduced massively because the diesel generator is used only in periods of low irradiation. Besides wear and tear and therefore maintenance costs are considerably reduced. As a result, plant operators are largely independent from fossil fuels and soaring prices. The CO2 emissions are also reduced and operators are consequently protecting the environment. By additionally aligning photovoltaic modules towards the East and West, the system produces solar energy in the mornings and evenings, hence further boosting the degree of solar electricity usage. The hybrid system safeguards long-term planning and cost security because the cost-effective electricity rate mainly results from the one-off PV system costs.

All required materials were transported to the island by truck and ferry. It took a mere 14 days to install both systems. Swiptec was very adamant that it would install the batteries and the remaining system technology so all components would be sheltered from environmental influences. All cables were also routed in sealed protective sleeves to prevent damage by animals, such as rodents. Swiptec has also been tasked with maintaining the hybrid system and in this process the plant is monitored using an online portal. As a result, potential malfunctions can be identified immediately to consequently reduce downtimes.

The grid-independent system allows the finca owners to safeguard a permanent power supply even without a connection to the grid and provide holidaymakers with a sophisticated experience even in these remote areas of the island. During the planning and installation of the hybrid system, swiptec (as one of 600 German Premium Partners) was able to fall back on 30 years of experience the IBC SOLAR photovoltaic system house has. IBC SOLAR’s hybrid power supply experts have already implemented a number of self-sufficient solar plants around the world, including in Malaysia, the Seychelles, India and other remote regions and islands.

About swiptec GmbH
Today, approximately two billion people – a third of the earth's population – do not have access to an electrical power supply. This applies most of all to inhabited areas in emerging and developing countries, where a lack of energy-related infrastructure impedes the connection to a public energy grid. For this reason, in addition to conventional feed-in systems, Leipzig-based swiptec GmbH has specialised in off-grid power supplies with renewable energies. Swiptec systems apply photovoltaics systems, but also small wind turbines, battery storage units, efficient motor-generators and fuel cells. Swiptec plans, develops and supplies complete systems for electrical energy supplies in line with customer requirements and on the basis of renewable energy sources. The company sets up or optimises said systems and enhances existing energy systems: www.swiptec.de