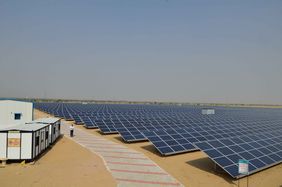 Rajasthan is one of the federal states with the largest amount of installed solar capacity in India and pursues a dedicated construction policy. The 5.5 MWp plant in Bhadla is part of a huge PV installation area with several PV power plants currently under construction near the Pakistanian border in the middle of the desert. The installation area has its own high-voltage grid substation constituted on behalf of the federal government of Rajasthan. IBC SOLAR successfully completed its project by connecting the plant to the public grid in August – in fact, IBC SOLAR’s PV power plant has been the second project within the whole PV construction area that has been grid-connected successfully. The handing-over of the turnkey installation to the Indian investor took place in late October after the official certification by TÜV Rheinland.

“India is a really cost-competitive market and in case of this project also topographically challenging,” said Rohan Jhawar, Director of LNB Renewable Energy Pvt Ltd (LN Bangur Group). “As one of the few EPC contractors worldwide, IBC SOLAR successfully keeps system costs low and meets price limits whilst making no compromises in quality and realising custom-tailored solutions. The high performance of the plant is certified by an independent institute and secures my investment over many years.”

The arid landscape made project execution a logistically and topographically demanding task. The next available connection to public train transportation is more than one hour’s drive away, the next airport almost a four hour’s drive. Due to bad road conditions and thus a high risk of damages, IBC SOLAR decided to transport the modules in containers from the harbour in Mumbai to the construction site near Bhadla. Another challenge was related to civil works and construction requirements. The soil on the construction site consisted of a 3 meter top layer of loose sand, which at first had to be levelled and freed from vegetation by local farmers. Secondly, IBC SOLAR carried out a detailed analysis of the soil conditions and performed a series of on-site tests with different foundations, such as ramming or piling. In a third step, IBC SOLAR decided to use special so called under-reamed foundations  perfectly suited for PV installations on loose soil and thus create more stability against wind loads. To counter the increased costs caused by the special foundations, modules were mounted four-row horizontally so that fewer rows were needed which simplified the necessary foundation. To meet the high quality standards with regards to the components and the demanding pricing requirements, the investor LNB Renewable Energy opted for branded IBC PolySol modules. Thanks to its stringent in-house quality assurance, IBC SOLAR is able to provide long-term product and therefore plant performance guarantees.

In addition to special foundations, the engineering team decided to use decentralised string inverters. The main reason for preferring string inverters to centralised inverters was the fact that they can be easily repaired or replaced in case of damages. This makes operation and maintenance services much easier on the one hand and on the other hand minimise the time and costs of downtimes in energy production. Furthermore, the special design of the string inverters allows them to be installed beneath the modules which gives them extra protection from sand and heat.

“The EPC project in Bhadla was a huge success for IBC SOLAR and its subsidiary,” concludes Reinhard Ling, Business Manager at IBC SOLAR Projects Private Ltd. in Mumbai. “We worked closely together with local workers and specialists realising a tailor-made PV construction and thereby meeting all special requirements. Our goal was not only to deliver high-quality components and German engineering standards, but also to ensure an effective transfer of knowledge, which is especially important in emerging markets like India. In the end, we can guarantee a maximum performance ratio and a quick return on investment for the investor.”

The Bangalore branch of TÜV Rheinland certificated the plant according to the international standard IEC62446. IBC SOLAR also commissioned an independent yield assessment and further evaluations of international norms applying to low voltage, electrical security and the safety of the PV modules. Thereby, the company sustainably ensures that the plant delivers best possible operating results and maximum security of investment.