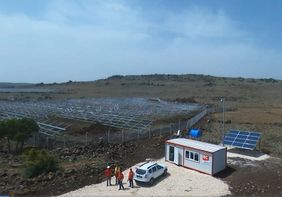 Bad Staffelstein / Germany, June 14, 2016 – IBC SOLAR AG, a global leader in photovoltaic (PV) systems and energy storage, has further expanded its position within Turkey. The Turkish regional company of the Germany-based business group is currently working on the implementation of five large-scale projects in Turkey. The systems will be realised as EPC projects by IBC SOLAR Turkey.

For all of its projects, IBC SOLAR Turkey has been referring to its large network of local franchise partners, which are spread all over the country. This enables the company to implement several projects simultaneously, as well as to guarantee maintenance work after implementation.

The projects in Gaziantep (6,4 MW), Niğde (3,3 MW), Eskişehir (1,1 MW), Izmir (2 MW) and Adana (4,8 MW) are already under construction. The solar systems are separated into several projects with under 1 MW each, meaning that some locations have been split into a number of systems. “This enables us to guarantee a simple grid connection under the current statutory regulations”, explains Bülent Yildiz, Technical Director at IBC SOLAR Turkey. These positive market developments are set to continue. In May, the regional subsidiary signed the contract for the implementation of a 17 MW project. The investor is the Tiryaki Group, one of the biggest food manufacturers in Turkey. The start of the construction is planned for autumn 2016.

For 2016, Turkey is planning to increase its photovoltaic power up to between 800 and 900 MW. “We were able to fittingly expand our project pipeline by more than 100 MW, so that we are able to continue getting to work on new projects this year as well as next”, says Hakan Daltaban, General Manager of IBC SOLAR Turkey. This year alone, work on up to 15 construction sites will be taking place simultaneously.

IBC SOLAR will be presenting further information on its international project business at this year’s Intersolar Europe from 22nd to 24th June (hall A3, booth 290), Europe’s most important trade fair for solar technology. The company will also be showcasing its full range of services as well as its latest products.