Subsidiary of IBC SOLAR AG designs PV projects with a capacity of 51 and 45 megawatt peak. 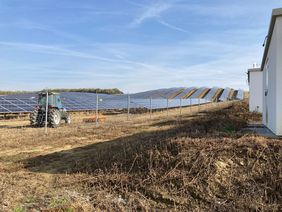 Bad Staffelstein / Budapest, March 08, 2022 – IBC SOLAR Energy, the international project division of IBC SOLAR AG, has signed contracts for the realization of two megawatt solar parks in Hungary with a nominal capacity of 51 megawatt peak (MWp) and 45 MWp. IBC SOLAR is responsible for the planning as well as component procurement and construction (EPC – Engineering, Procurement and Construction) of the solar parks. The projects are scheduled to start construction in the spring of 2022.

The signing of the contract between IBC SOLAR Energy and MET Group was the kick-off for the construction of two new solar parks in the municipalities of Gerjen and Söjtör. With a capacity of 51 MWp, the solar park in Gerjen will produce approximately 66.400 Megawatt hours (MWh) of electricity per year, while the solar park in Söjtör, with a nominal capacity of 45 MWp, will generate around 57.700 MWh in the future. Together, this corresponds to the estimated annual electricity consumption of more than 35,000 three-person households. As the main contractor, IBC SOLAR will provide the solar parks as ready-to-use projects. Both parks are scheduled for completion in autumn of 2022.

Renewable energies account for an increasing share of Hungary's energy supply since 2020, and photovoltaics is gaining importance in the country. "We are very pleased to be part of this market development and to continue our strategic partnership with MET Group," said Eric Herrmann, EPC Program Manager at IBC SOLAR Energy. "Photovoltaics is one of the key technologies of the energy transition and has the potential to become the leading energy source of the 21st century."

The realisations of the new solar parks in Gerjen and Söjtör are not the first joint projects of IBC SOLAR and the investor MET Group. In 2020, the successful partnership already resulted in the largest operating solar parks in Hungary at that time. The park with a nominal capacity of 43 MWp is based in the Kabai municipality.