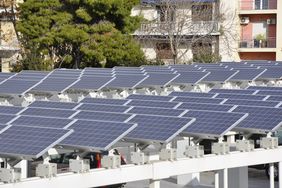 Bad Staffelstein (Germany) /Athens (Greece), December 13, 2011 – The U.S. Embassy in the Greek capital of Athens is placing the emphasis on solar power. In October, a photovoltaic array with a nominal power of 96,6kWp delivered by IBC SOLAR was put into operation by the U.S. Embassy. Generating approximately 135.000kWh of green electricity per year from sunlight, the installation will achieve an annual reduction of CO2 emissions of 135 tons. The electricity generated by the PV array will be used directly in the embassy building instead of being fed into the public grid.

IBC SOLAR A.E., the Greek affiliate of IBC SOLAR located in Athens, was responsible for planning the array and the delivery of all components. Construction began in mid July 2011 and was completed within a few weeks. 420 poly-crystalline IBC PolySol 230TE PV modules now generate around 135,000 kWh of solar power per year which will be entirely used for the supply of the embassy building.

The array was constructed above an open parking lot. Apart from generating green electricity, the modules therefore also provide shade for the vehicles parked underneath. “We were extremely pleased to build this flagship project for the U. S. embassy”, said Panos Biazzos, general manager of IBC SOLAR A.E. “Projects like these truly demonstrate the value and the advantages offered by PV installations.”

The project was carried out within the "U.S. Mission Solar Energy Project" aimed at supplying all U.S. embassies worldwide with PV systems integrated into the buildings. Serving as a role model, similar efforts were already completed in Geneva (Switzerland) and Kigali (Rwanda). “This is a great project that exemplifies the United States’ commitment to renewable energy and to pursuing green solutions, by reducing the environmental footprint of the Embassy,” said the U.S. Ambassador to Greece, Daniel B. Smith. “As President Obama has emphasized, the U.S. needs to lead by the power of example in using energy intelligent products. The photovoltaic installation is exactly that kind of initiative.”

IBC SOLAR AG has been active in the Greek PV market since 2007 with its affiliate IBC SOLAR A.E. The company provides a comprehensive range of products and systems for generating solar electricity. IBC SOLAR A.E. serves a nationwide network of installers with components, technical support and assistance for designing and planning PV arrays. In addition, the Greek affiliate also implements its own turnkey PV projects.