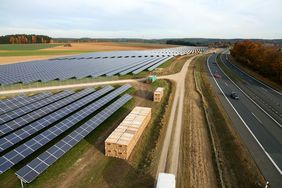 Bad Staffelstein (Germany), 24 April 2012 – Photovoltaics specialist IBC SOLAR has successfully commissioned six out of eight areas of the Jura Solarparc. Producing an output of almost 33 Megawatt peak (MWp), the power plant can supply electricity to the equivalent of 7,800 households per year, and save about 18,000 tons of CO2.

Following the symbolic groundbreaking ceremony, by the Bavarian Prime Minister, Horst Seehofer on June 16 2011, six areas of the Jura solar park are now operational with a total output of 28.5 MWp. With 145,000 solar modules, spread across a total of eight segments, the project spans over 80 hectares and runs alongside the A70 motorway between Bamberg and Bayreuth. This makes the Jura Solarpark Bavaria’s largest photovoltaic project planned in 2011. Although the last two segments are currently being constructed, planning permission has been submitted to extend the park by three additional areas.

Due to the high, total output of the solar park – 40 MWp - a dedicated sub-station has been built. The station was paid for by IBC SOLAR. And connection to the grid is made via the existing 110 kV high-voltage power line between Kulmbach and Würgau.

Jura Solarpark is welcomed by the local community. The 100 meter wide area next to the A70 motorway, was highly polluted, low-value strip of land. Now it is home to the solar park, and the neighbouring village of Buckendorf particularly appreciates the addition of a glare-shield as it will help improve driving safety, as well as being an effective sound barrier.

Oliver Partheymüller, Project Manager at IBC SOLAR Invest GmbH, and jointly responsible for the creation of the Jura Solarpark, said, “The Jura Solarpark is a significant climate protection project in and for this region. Three districts joined forces to support Germany’s energy transition. They are convinced that we can autonomously provide all the electricity needed by private homes and businesses. Willing to be a part of this future project, they also benefit from positive side effects including improved internet access and noise protection.”

In addition, residents from the neighbouring communities also have the opportunity to benefit financially because four of the six partial areas will be marketed as citizen solar parks. This means that when the project is commercially finalized this summer, residents from the districts of Bamberg, Lichtenfels and Kulmbach will be able to invest in solar energy without operating a photovoltaics array of their own. The official inauguration for the Jura-Solarpark will be celebrated this summer.