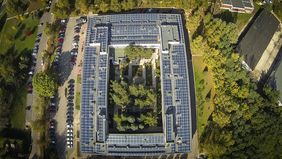 Bad Staffelstein / Germany, December 3, 2014 – IBC SOLAR, a global leader in photovoltaic systems, has completed the construction of a 237 kilowatts peak (kWp) solar energy plant in the Polish city of Łódź. Installed on the roof of a hospital, the project marks a milestone as the biggest PV rooftop installation to date in Poland. IBC SOLAR’s Czech subsidiary, which serves both the Czech and Polish market, not only contributed to the project’s success by delivering high-quality components, but also provided the technical know-how and trained the installers for the actual project execution.

IBC SOLAR s.r.o. completed the plant construction in fall 2014 installing a total of 947 IBC PolySol modules on the roof of the hospital in Łódź. Apart from the modules, IBC SOLAR also delivered the inverters as well as the mounting system IBC AeroFix, a product developed by IBC SOLAR using its many years of experience with ballasted flat roof mounting systems. IBC AeroFix is a very flexible, light-weight and at the same time stable PV mounting system which allowed IBC SOLAR to fully exploit the roof area. By aligning a part of the modules in an east-west direction, a maximum of modules could be installed. Thanks to a high degree of prefabrication and by using high-quality materials such as aluminium and stainless steel, the system offers the optimum solution for applications where an exceptional level of quality, efficiency and flexibility is required.

Since its foundation more than 30 years ago, IBC SOLAR is committed to the development of the photovoltaic industry worldwide. Therefore, an effective transfer of knowledge is a decisive part of the company’s strategy for its international projects. In its function as a system provider, IBC SOLAR not only delivered components of German quality standards, but also supported the local installation company PPHU JAMBUD Sp. z o.o. Sp.k. in Łódź with the planning of the PV system and static calculations. In advance of the construction, the local staff was trained by technical experts for an optimal project execution. Thereby, quality control is secured along the whole value chain.

“Poland’s PV market is evolving, and solar energy will become increasingly important in the energy mix of the country. We want to actively contribute to this development by providing more than 30 years of expert experience in the field of solar energy. The project in Łódź is an impressive example for our successful activities in Eastern Europe,” explains Jakub Halamíček, Managing Director at IBC SOLAR s.r.o.

The PV project on top of the hospital was partly funded by the government through a public grant. In Poland, coal power is still very strong. The aim, though, is to grow the share of renewable energies in energy consumption over the next years in order to meet the renewable energy and climate change policies of the European Union.