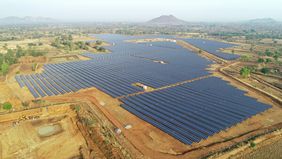 Bad Staffelstein/Germany, May 14, 2018 – IBC SOLAR, a global leader in photovoltaic (PV) systems and energy storage, has completed a 27 MW solar plant near Kesinga in the Indian state of Odisha. For IBC SOLAR this is its largest project to date as well as its first project in Eastern-India.

While states like Rajasthan, Telangana and Andhra Pradesh already have a large share of solar power with more than 2 Gigawatts installed capacity each, the state of Odisha lags behind with approx. 90 MW installed capacity (by autumn 2017) and has only recently begun to try and pick up speed. With the newly connected PV plant,
IBC SOLAR is supporting Odisha to increase its share of solar power by around 30 percent. This is an important step for the economic development in Odisha and, in particular, for the district of Kalahandi where the new solar plant is situated.

Shailendra Bebortha, Managing Director of IBC SOLAR in India, explained that this project will put Western Odisha prominently onIndia’s solar map. He also expressed his thanks to all the Contractors, State Government departments, Solar Energy Corporation of India (SECI), lenders and local public for this success.

IBC SOLAR´s project is part of a 270 MW PV tender floated by SECI in the state of Odisha in August 2016. As a result, a 25-year Power Purchase Agreement (PPA) was awarded to IBC SOLAR through a competitive auction process. Project financing was concluded with L&T Infrastructure Finance Company Limited in March 2017. Following the securement of 111 acres of land in August 2017, the local electric power transformation substation had to be upgraded to manage the soon-to-be generated energy, a transmission line for approx. 8 km was built and construction of the solar plant then started in November 2017.

“With this project, we have consolidated a strong know-how in project development, land securitisation and grid connection in Odisha, a state with a high potential for solar PV build-up”, says José María Llopis, CEO of IBC SOLAR Energy GmbH. It is not only the company’s largest single location plant, but also its first project in India that was fully developed, financed, constructed and commissioned by IBC SOLAR alone. The solar plant meets the high-quality standards of IBC SOLAR as well as it fulfils stringent international standards of health and safety.

More information on the company’s international services, as well as on further news and product highlights from IBC SOLAR, can be discovered at the Intersolar Europe (June 20 to 24, 2018), Europe’s leading trade fair for solar technology, in hall A3, booth 579.