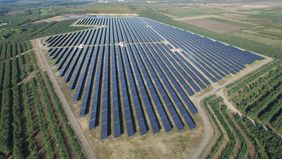 Bad Staffelstein / Eisenstadt / Visonta, 21. October 2015 – IBC SOLAR AUSTRIA completed Hungary’s largest photovoltaic power plant on time at the end of September and handed it over to the operator following the conclusion of a test phase. The official handover took place during a ceremony on 14th October. The park, which has an output of 18.5 megawatt peak (MWp), is located in the direct vicinity of the lignite-fired power plant Matrai Erömü.

The solar park will be able to supply around 10,000 Hungarian households per year with electricity generated from solar energy. The construction of the megawatt power plant in Hungary is the largest individual project ever undertaken by the international company IBC SOLAR Group.

The slag heap of the Matrai Erömü power plant measures 30 hectares and has been covered by 72,480 solar modules, which are each connected to one of the site’s ten central inverter stations. The largest coal-fired power plant in Hungary now has the country’s largest ever photovoltaic plant as its neighbour.

IBC SOLAR has over 30 years of experience in the photovoltaic industry. The PV system provider has been successful as a distributor of solar systems and as a project developer and EPC-contractor for many years. In this role, the company has been responsible for building a number of megawatt photovoltaic power plants worldwide, including in Germany, Italy, Japan, Portugal, Spain, India and Malaysia.