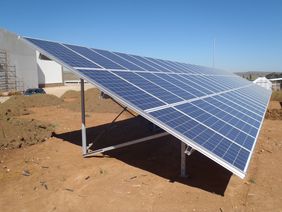 Bad Staffelstein / Heidelberg (South Africa), September 20, 2011 – Coca-Cola is utilizing green solar power in its Valpré plant at Heidelberg in South Africa. At the site of a newly constructed water bottling plant, a photovoltaic system was built using components from German PV specialist IBC SOLAR. The PV system was installed by IBC SOLAR’s South African partner Lapp Group. At a nominal power of approximately 30 kWp, the photovoltaic system will generate approximately 50,000 kWh per year. For this project, Coca-Cola received the sustainability certificate of the ‘Green Building Council of South Africa’ which honors energy-efficient buildings.

IBC SOLAR was responsible for delivering the modules, additional components and the monitoring system and for starting up the facility. A total of 132 IBC PolySol modules and two inverters were installed together with Lapp Group as a partner. With this PV system, Coca-Cola contributes to a sustainable and environmentally friendly electricity generation. The PV system will make the company less dependent on the local power grid while also reducing annual CO2 emissions by 29.5 tons.

Constructions of a nationwide power grid are still underway in South Africa. Electrical supply is only available near the main grid lines at high tariffs. Companies and residents therefore often use diesel-powered generators as a back-up power supply, a costly approach which is as well harmful for the environment. For this reason, solar-generated electricity is increasingly used as an alternative to conventional power plants. In order to have a sustainable, distributed, low-cost electricity supply on a local basis, the Coca-Cola executives decided to build their own PV project.

The Lapp Group as IBC SOLAR’s partner will monitor the facility, ensuring that the facility will yield high long-term returns. Using an automatic remote-monitoring system, technical problems can be identified and remedied in order to avoid potential failures. The Lapp Group will also be responsible for the regular maintenance of the installation.

Dieter Dilchert, Director at the renewable energy division at Lapp Group explained: “Our close collaboration with IBC SOLAR enabled us to build this environmentally-friendly PV facility and to contribute to Coca Cola’s global green strategy. The government’s support will certainly drive ahead the creation of sustainable infrastructures in South Africa, and solar technology will become a significant success factor for additional energy-efficient buildings in our country.”

“The company is setting a good example by building this PV facility”, said Alexander Müller, who is responsible for the Off-Grid Power Supply business at IBC SOLAR. “Solar energy in particular enables the promotion of the local infrastructure development and the prevention of significant CO2 emissions. As an international PV system provider, it is our goal to promote the use of renewable energies in South Africa.”

Thanks to its high solar radiation, South Africa is ideally suited for the use of photovoltaic technology. The South African city of Johannesburg, for instance, has an annual insolation of nearly 2,000 kWh/m2.