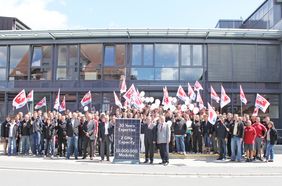 Bad Staffelstein, July 12, 2012 – IBC SOLAR AG, a global leader in photovoltaic systems, celebrates its 30th anniversary this year and has as of the end of June, 2012, implemented solar modules group-wide with a rated output of more than 2 gigawatts (GW). Another milestone was already reached last March with the delivery of the 10 millionth solar module.

"We had reached the 1 GW mark in the middle of 2010. Now, two years later, we were able to double capacity," enthuses Norbert Hahn, board member at IBC SOLAR AG, regarding this growth. "We achieved this outstanding performance as a strong team together with our employees and partners. We are all pursuing the same goal: offering high quality and the best service." Every year the 2 GW implemented capacity are able to supply approximately 475.000 average households with environmentally friendly solar energy.

From an engineering firm in 1982 to one of the world's leading providers of complete photovoltaic systems, the company in Germany's Upper Franconian region has been honored with numerous awards, including Bavaria's "Best 50 Award", Employer of the Year, SIEgER 2012 – fair chances at the place of employment, and Ernst & Young's "Entrepreneur of the Year 2009". In addition, the company has lately been certified according to DIN ISO 9001, DIN ISO 14001 and BS OHSAS 18001.

IBC SOLAR's successful distribution system has been proven since the company's founding. The most important sales channel for the solar pioneer is its distribution network, which IBC SOLAR started focusing on back in 1985, and has since built into a comprehensive network of local partners. They serve private households in the implementation of roof systems. "From the time the company was founded, I wanted to establish a network of local installers. There were two reasons behind this. First, they have the necessary contacts in their region and proximity to the customers. Second, the creation of value takes place in the respective region and strengthens the medium-sized companies as well as handcraft firms," explains Udo Möhrstedt, founder and CEO at IBC SOLAR AG.

In addition to supporting its partners, IBC SOLAR completes projects for commercial clients, and implements public participation models which enjoy great popularity and acceptance among the population. The projects business, especially the demand for planning and implementing solar parks, has become an increasingly larger and more important business area for the company, and has made a significant contribution to the positive development and growth of IBC SOLAR.

"We rely on solid financing and thus on long-term financial stability. This strategy will help us in turbulent times to remain on the path to success and even to expand internationally," said Jörg Eggersdorfer, board member at IBC SOLAR AG. "Another contribution to our successful development is that we observe and intensively evolve promising markets," added Norbert Hahn. Until now the company has established 11 subsidiaries world-wide.