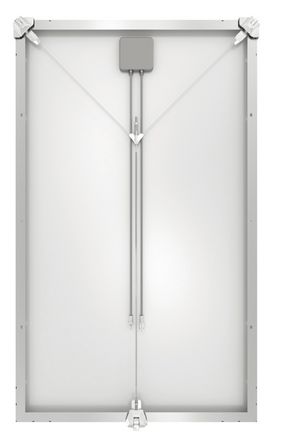 In areas with heavy snowfall, PV systems are exposed to particularly high snow loads. The weight of the snow and its down-force can overstress and deform the lower edge of the module frame, especially in the first row of modules on the roof, thus damaging the modules. To solve this problem, IBC SOLAR has developed the frame reinforcement IBC FrameFix for PV modules.

“We are in close contact with our partners and customers and take their concerns seriously. This also applies to the problem of snow loads,” said Kristijan Fotak, product manager and structural engineer at IBC SOLAR AG. “According to the current testing standard IEC 61215 for photovoltaic modules, the mechanical load test only requires a uniformly distributed load in horizontal position. For modules that are installed on sloping roofs, snow accumulations might lead to an inhomogeneous distributed snow load putting unbalance pressure on the modules. Additionally, the incline of the roof top where the modules are located means gravity will pull the snow load down and put a heavy burden on the stabilizing frame of the PV modules, potentially resulting in broken modules. This occurs relatively rarely, but the chance is always there. To counteract such events, we have taken the initiative and developed an additional stabilizing retainer for module frames, the IBC FrameFix,” Fotak explained.

The IBC FrameFix is a robust steel cable construction which is barely visible and is fixed on the back of the module. It is suitable for PV systems with a module frame size of 1660-1680 mm length, 990 mm width and 40-50 mm height, as well as for retrofitting such systems. The frame reinforcement is mounted with only a few simple steps and does not require special tools or additional installations on the roof. It is attached to the module by tightening it with a screw. Additional drilling on the frame or work on the retaining system is not necessary. With the FrameFix, the down-forces of snow are directly routed through the module clamp to the carrier profiles. This effectively increases the bearing capacity of PV modules in a quite simple way.

The IBC FrameFix will be available starting October 2012 and has already been tested on a load-applying mechanism developed by TÜV Rheinland for analyzing the effects of inhomogeneous snow loads under real-life conditions. IBC SOLAR significantly supported this development with test series and field data. The load-testing device will be presented to an expert audience for the first time at this year’s EU PVSEC (European Photovoltaic Solar Energy Conference and Exhibition) in Frankfurt at TÜV Rheinland’s exhibition booth (hall 3.1, stand F22).