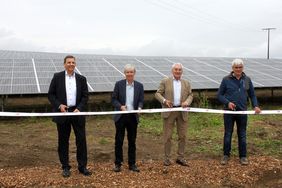 Bad Staffelstein / Germany, September 15, 2021 – IBC SOLAR AG, a global leader in photovoltaic (PV) systems and energy storage, has officially inaugurated two of a total of four sections of the Draisdorf-Eggenbach solar park (Markt Ebensfeld, Upper Franconian district of Lichtenfels, Germany) with a capacity of 10 megawatt peak (MWp) – the south and south-west sections. The grid connection – including the north and west sections – is imminent. The solar park will generate around 21,400 megawatt hours (MWh) of electricity annually and can cover the energy demand of approximately 6,100 three-person households.

In the wake of the energy turnaround, open-space solar parks make an important contribution. Now local residents in Markt Ebensfeld can also benefit from it. A total of 54,016 solar modules will provide climate-friendly solar electricity there in the future. The park covers an area of 18.6 hectares. The park's total output of 20 MWp is divided into the North (4.6 MWp), West (5.4 MWp), South (6.3 MWp) and South-West (3.7 MWp) sections. With today's inauguration, 10 MWp have already been completed. The grid connection will follow shortly.

"We are very pleased about the implementation of the solar park in our municipality," said Bernhard Storath, Mayor of Markt Ebensfeld: "Renewable energies, and particularly photovoltaics, are key technologies for preventing climate change. I am proud that Markt Ebensfeld is setting a good example here.

The solar park was planned and implemented by IBC SOLAR AG. CEO Udo Möhrstedt comments: "As a local company, the realisation of solar parks in the Upper Franconia region is always something special for us. In addition to providing green electricity for local residents, solar parks are also very important for the environment, as they contribute to the preservation of biodiversity. In this respect, we continue to rely on the support of model communities and municipalities in the region, such as Markt Ebensfeld, who are working with us to advance the energy turnaround."

IBC SOLAR will continue to ensure the solar park's performance and sustainable yield in the future, as the technical operation and maintenance will remain in the hands of the company. Daily monitoring, regular maintenance work and timely fault management are key tasks in this regard.