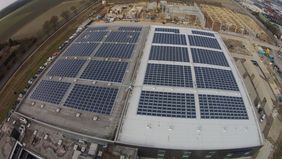 Bad Staffelstein, May 18, 2015 – SolarMeile Hildesheim, Premium Partner of the photovoltaic (PV) system house IBC SOLAR, has installed a photovoltaic system for self-consumption for the cosmetics manufacturer Rufin / Gieseke cosmetic. The low-price solar power is used in all divisions and significantly reduces the business expenditure of the company. There are already plans to expand the PV system to one megawatt peak.

The IBC SOLAR Premium Partner SolarMeile Hildesheim was responsible for the complete DC installation of the PV system. The company has installed a total of 1,988 IBC PolySol 250 VM solar modules, 16 inverters and 22,000 metres of IBC FlexiSun cables. The total output of the system at the new storage and logistics warehouse of the company near Hanover (Germany) is around 500 kilowatt peak. Through commissioning the system in April 2015, Rufin / Gieseke cosmetic can now generate around 450,000 kilowatt hours of its own solar power each year. The cosmetics manufacturer uses 75 percent of this power directly within the company.

The comparably low investment costs of around half a million euros are thus covered by the considerable savings that are generated in the long-term as a result of the significantly reduced purchasing of expensive energy provided by external utilities providers.Hair care products including the brand "Swiss-o-Par" have been the North German cosmetic manufacturer’s recipe for success since 1960. The pan-European company develops and produces its product range in Langenhagen near Hanover. "Advanced procedures and modern technology have always been part of the philosophy of our family company,” says Hendrik Rumpfkeil, CEO of Rufin / Giesecke cosmetic. “This also includes using modern energy, among other things. We have therefore taken the conscious decision to integrate a modern photovoltaic system for the production of our own electricity from the outset at a new warehouse," explains Hendrik Rumpfkeil.

The use of the PV system pays off in more ways than one for Rufin / Gieseke cosmetic: By using self-produced solar energy, the power generation costs calculated over 20 years amount to just eight cents per kilowatt hour. The solar energy is used to supply power to the warehouse, laboratory and production and administration facilities, and considerably reduces business expenditure. In addition to profitability, using renewable energies also has a positive impact on the image of Rufin / Gieseke cosmetic. By consistently investing in renewable energies, the company is becoming a pioneer in the region of Hanover when it comes to implementing regional climate protection goals.Thanks to this positive experience, the cosmetics manufacturer will also continue to invest in photovoltaics in the future: In addition to the warehouse, a PV system will be installed at the new administration and production building at the same location, which will double the total output of the system to one megawatt peak. IBC SOLAR will present its globally available PV system solutions for grid feed-in and self-consumption at this year's Intersolar Europe, June 10th to 12th, booth B2.150 in Munich.