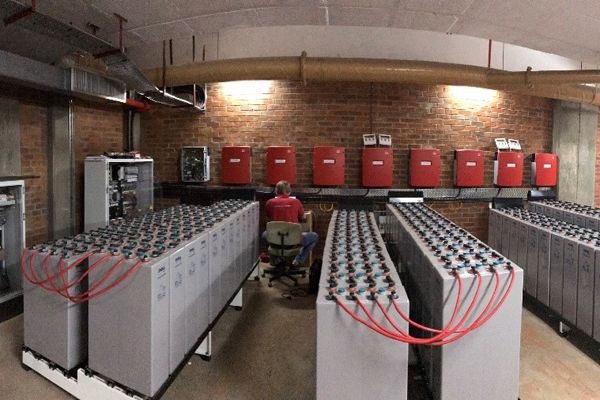 The right storage solution for your home

A powerful storage solution from IBC SOLAR makes more out of your photovoltaic system. This creates the conditions to have access to solar power around the clock - and not just when the sun is shining.

Our portfolio includes storage systems tailored to a wide range of requirements and sizes, from single-family homes to multi-party buildings.

Solar battery - what is it actually?

The electricity generated by photovoltaic plants is stored in a solar battery and made available when required for self-consumption. They are therefore also referred to as solar storage or as solar energy storage. Solar batteries are a novel invention, which have been growing in popularity since 2012. This year, the federal government adopted a reform of the Renewable Energy Sources Act (EEG). In this, the feed-in tariff for solar power was significantly reduced. The consequences: more and more private individuals have decided not to feed their self-produced electricity into the public grid, but to use it for their own needs. Today, solar batteries are still very popular. The autonomous energy supply is a popular alternative not only in the face of rising energy prices, but also from an ecological perspective.

How does a solar battery work?

Strictly speaking, a solar power storage is not just a battery but a rechargeable solar battery. In case of strong solar radiation the generated solar energy exceeds the energy demand of the house. The excess energy is passed into the battery and charges it, like a battery. The stored solar power can be used at a later stage to operate household electronic appliances. As a rule, a distinction is made between two different solar power storage units: lithium-ion battery storage and lead-acid battery storage. However, the chemical reaction responsible for the function of the solar battery is similar.

Which batteries are suitable for solar systems?

Although the basic functions of lithium-ion batteries and lead-acid batteries do not differ, they are two divergent technologies. In order to find out which solar battery is best suited for use in the in-house photovoltaic system, some concepts have to be clarified in advance.

The energy density gives information about the capacity of the solar battery with regard to its size. The higher the energy density, the smaller the solar battery - with the same storage capacity. At this point, lithium-ion batteries are clearly ahead, since all components are installed in a confined space. Last but not least, lithium-ion batteries - apart from photovoltaics - are also installed in smartphones and notebooks.

During charging and discharging, the solar battery emits heat to the environment. As a result, part of the stored solar power is lost. Out of 100 percent cached electricity you only get back a certain percentage. This is called efficiency. Modern lithium solar batteries often have an efficiency of over 90 percent, in the lead variant, this value is between 70 and 80 percent. To be able to make statements about the efficiency, the whole system has to be considered. In addition to the efficiency of the solar battery the efficiency of the other system components, e.g. PV inverters, battery inverters, DC / DC converters, or backup components must be considered. In addition, the proper sizing of the system plays an essential role. For a professional interpretation, you are welcome to contact your local IBC specialist partner.

The lifespan of the solar battery is determined by two ageing mechanisms. These mechanisms are referred to as the cycle life and calendar life of a solar battery. The end of life is not synonymous with the “death” of the solar battery, but means that the capacity of the solar battery has fallen to a residual value defined by the manufacturer. In general, this is between 60 and 80 percent of the initial capacity. The calendar life is independent of the use of the memory. It is 15-20 years for lithium solar batteries and about 10 years for lead-acid solar batteries. The cycle life, represented by the number of cycles, indicates how often the battery storage can be fully charged and discharged before its capacity falls below an inoperable limit. Lithium-ion solar batteries have around 4,000 cycles. Each year, a solar battery uses about 250 cycles. A lithium solar battery, which is usually provided with 4,000 cycles lasts about 20 years. Lead-acid batteries have about 1,200 to 2,500 charge cycles and therefore lasts only about ten years. Therefor a higher number of cycles brings no advantage, since the calendar life represents the upper limit. Both lithium-ion batteries and lead-acid batteries lose their lifespan when they are in very warm environments for a relatively long time. As a rule of thumb, 10 ° C higher average temperature means twice the aging rate.

Many solar batteries have a so-called maximum discharge depth. Basically, a lower depth of discharge means a decrease in cycle life, but of course a lower usable storage capacity as well. The discharge depth is given as a percentage: 80 percent DoD (Depth of Discharge) means that 80 percent of the fully charged solar energy storage system is used. While modern lithium-ion battery storage systems advertise discharge depths of 100 percent, the cost-benefit optimum for lead-acid batteries is around 50 percent.

There are many reasons in favor of buying a solar battery. No matter whether lithium model or lead battery storage: the storage of self-generated solar energy protects the environment and your wallet. Research is working intensively on more and more efficient models for private use, and it is likely that the number of private solar systems will continue to increase in the future as well. The energy experts from IBC SOLAR will gladly assist you in choosing the solar power storage system that suits you and provide you with comprehensive information on the subject of photovoltaics.