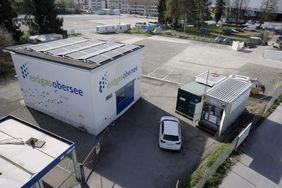 The basic concept is just as ingenious as it is simple: Gas is produced from electricity. Water molecules are split into hydrogen and oxygen by means of electrolysis. The hydrogen is fed into a reactor together with climate-neutral carbon dioxide in which both gases react with one another. The result of this reaction is methane gas and water. A PV plant supplies solar power generated from a renewable source for this power-to-gas procedure. The power-to-gas plant produces a full tank of fuel for a gas vehicle in 20 hours, which enables it to run 400 kilometres.

The PV system with durable, monocrystalline solar modules of the IBC MonoSol 270 CS type with an output of around 7.4 kilowatt peak was designed, installed and commissioned in January 2015 by ch-Solar AG. In order to meet the specific requirements of the project, the Swiss solar company used the components of the German system provider IBC SOLAR. This enabled them to find space for as many modules as were needed on the small roof surface. ch-Solar opted for the space-saving flat-roof mounting system IBC AeroFix. It allows surfaces to be covered with modules right to the edge and therefore allows the best possible use of small roofs.

The planners also took the decision to arrange the modules from east to west. In comparison to the traditional southerly alignment a maximum return on each module is renounced here. However, electricity production can be extended to the morning and evening hours. Furthermore more modules can be mounted on the flat roof, which means that more energy can ultimately be produced.

But why is it necessary to take a detour via methane production instead of refuelling an electric vehicle directly with solar power? Scientists want to take advantage of the specific benefits offered by the power-to-gas principle. One of these advantages is that methane gas can be stored significantly longer than its precursor product electricity. Another advantage is the fact that the vehicle can be refuelled significantly quicker and can travel longer distances.

Erdgas Obersee AG and the IET Institute for Energy Technology at the HSR Technical University Rapperswil are the initiators of the power-to-methane pilot and demonstration plant of the HSR which also offers scientific support throughout this long-term experiment. The project partners involved also share this vision. The power-to-methane pilot and demonstration plant is a cooperation between Erdgas Obersee, Audi, Erdgas Regio, Rapperswil-Jona power station, Climeworks, Etogas and the Research Fund for the Swiss Gas Industry (FOGA).