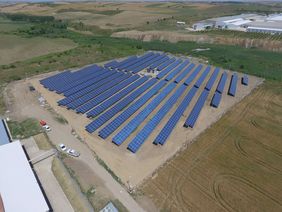 Bad Staffelstein / Germany, August 20, 2018 – The Turkish subsidiary of IBC SOLAR AG, a global leader in photovoltaic systems and energy storage, has commissioned a turn-key solar energy project with a total capacity of 1.161 MWp in Merkez near the Bulgarian border. The ground-mounted plant has already been handed over to Edirne Giyim Sanayi, a leading textile company in Turkey. The PV plant was built for the company's own electricity consumption and can cover 70 per cent of the energy demand.

With the completion and handover of the PV plant in mid-August 2018, IBC SOLAR Turkey finished another large-scale PV project, which is used for the commercial direct-consumption of solar energy. Regarding increasing prices for electricity, the investment in PV power plants with a self-consumption model becomes more and more attractive amongst Turkish companies.

The project's design and installation – including project preparation, material selection and project procurement – was carried out by IBC SOLAR Turkey. 4,224 polycrystalline modules are expected to produce 1.6 million kilowatt hours per year and to prevent 916 tonnes of CO2 emissions. The solar energy covers about 70 per cent of the company’s total energy demand.