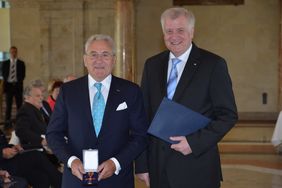 Bad Staffelstein, May 7, 2012 - Udo Möhrstedt, chairman of the board and founder of IBC SOLAR, has been awarded the Cross of the Order of Merit of the Federal Republic of Germany by Germany’s Federal President. The decoration was presented by Bavarian Prime Minister Horst Seehofer during a ceremony held on the 4th of May in Munich.

In honoring his achievements, it was said that, due to his entrepreneurial foresight, Udo Möhrstedt not only strengthened the appeal of Germany as a location for business and technology, but also helped photovoltaics to achieve an international breakthrough. In addition to his entrepreneurial dedication, Möhrstedt’s voluntary commitment to the sustainable use of renewable energy sources as well as a multitude of initiatives in politics and business are also honored.

Udo Möhrstedt commented on the prestigious accolade as follows: “I am very pleased to receive the Federal Cross of Merit because it first and foremost honors the success of solar energy, which IBC SOLAR has dedicated itself to. The image of villages and towns without solar energy is unthinkable today. People want clean power and independence. Both are infinitely available due to the inexhaustible power of the sun and thanks to photovoltaics. Today, the sun is used by millions of people as a source of energy. I am therefore accepting this medal on behalf of these people for their commitment.”