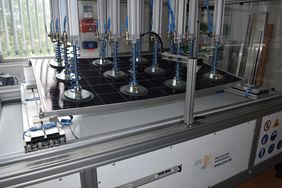 Bad Staffelstein, October 25, 2018 – IBC SOLAR AG, a global leader in photovoltaic (PV) systems and energy storage, has expanded its in-house quality control laboratory with a loading table for both, mechanical-static and dynamic testing. Modules can therefore not only be subjected to a load test alone, but also in conjunction with mounting systems. As a result, the in-house quality control becomes even more closely meshed, so that IBC SOLAR’s customers can rely on the permanently high system quality, which is checked independently of manufacturers. This is also part of IBC SOLAR's reaction to the end of the minimum import price (MIP) for solar modules.

With the new procedure, wind loads with pressure and suction forces as well as the weight of snow loads up to 5,400 pascals can be tested. To make the test as close to reality as possible, modules are tested together with mounting systems. To simulate the installation on pitched roofs, inclinations are possible and assembly components can also be individually tested.

Mechanical-static testing according to DIN EN 61215-2:2017 supplements the existing quality controls, which IBC SOLAR carries out in its own quality control laboratory on modules belonging to its own IBC SOLAR Line brand and on modules by other manufacturers. Even before product launch, but also upon receipt of goods, the modules are subjected to test series in climatic chambers, flashers and in a test facility. This quality control is now being expanded with the new load test. In order to pass the test, the modules must not show any deformations, breaks, detachments, micro cracks or power losses after the six-hour load cycle.

The dynamic testing goes beyond the static testing of the DIN standard and is additionally carried out for modules of IBC SOLAR’s own brands. Here, a high-frequency test is used to simulate loads to see how extreme weather conditions affect the modules over the course of several hours, for example. In practice, extreme weather conditions have increased over the past several years due to climate change. PV plants are subjected to huge wind loads more frequently. Here, too, the interaction of modules and mounting systems is decisive for the resilience and therefore longevity of the PV systems.

IBC SOLAR is reacting to various developments of the PV market with the expansion of in-house quality controls. IBC SOLAR's new in-house testing therefore enables a quicker reaction to product changes on the part of the manufacturers. A typical example for this is declining frame sizes, which can not only have an effect on the stability of the modules, but also on the mounting system. Here, the testing and permanent protection of system quality is the focus for IBC SOLAR.

The expiry of the minimum import price (MIP) for Chinese photovoltaic modules is another reason for IBC SOLAR to further invest in its own quality assurance. Sebastian Geier, head of product management at IBC SOLAR: "For customers who choose IBC SOLAR Line modules or modules by other manufacturers in the IBC SOLAR portfolio, we guarantee the highest level of quality – and we do so permanently. Anyone who buys from us can be sure that they will only receive quality goods with guarantees that keep what they promise." IBC SOLAR offers a 15-year product and 25-year performance guarantee for modules of its own brand.