700 kilowatt PV system developed and implemented by Norwegian Solenergi FUSen AS and German IBC SOLAR AG on the rooftop of a cold storage warehouse of Norway’s leading food logistic company. 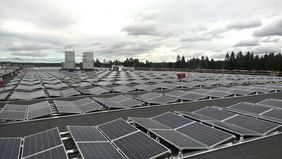 Bad Staffelstein / Germany, July 5, 2016 – Solenergi FUSen AS, the Norwegian Premium Partner of IBC SOLAR AG, a global leader in photovoltaic (PV) systems and energy storage, has expanded one of its prestige projects in Vestby, Norway. In 2014, the company installed Norway’s biggest PV installation to-date on the rooftop of a dry storage facility belonging to the country’s leading food logistics company ASKO. In April, Solenergi FUSen AS officially commissioned another 673 kilowatts (kW) to the PV system, subsequently increasing its size by three times, up to a total capacity of 1 megawatt peak. The 2588 modules will produce approximately 550 MWh of solar energy per year, which ASKO will use completely for self-consumption.

The self-consumption of the solar energy produced in addition helps ASKO and its holding company Norgesgruppen to reach their target of becoming carbon neutral. “Our ambition is to produce as much renewable energy as we consume. We want to achieve this with a combination of energy savings, solar energy production on-site as well as wind energy production off-site”, says Lars Erik Olsen, Chief of Technology at ASKO Bygg Vestby. The system provided by Solenergie FUSen and IBC SOLAR represents an important step for ASKO and its 14 logistic centres towards achieving this goal. The company is planning to triple the solar capacity of the system again next year. The installation of another 800 kWp is expected to start in August. The energy demand of the warehouse matches photovoltaic systems perfectly: When there is lots of sunshine, the storage facility needs the most energy in order to keep the temperature at a constant level.

To meet the special requirements of the rooftop, Solenergi FUSen has opted to use the aerodynamic mounting system IBC AeroFix from IBC SOLAR, which is specially developed for flat roofs. Besides the fast mounting, the system enables a very light-weight installation in east-west orientation with no need for a screw connection to the sensitive roof. Thanks to the east-west orientation of the modules, the PV plant generates energy throughout the day, enabling ASKO to significantly increase its self-consumption rate.

Solenergi FUSen, a leading Norwegian company for solar energy installations, has been developing the project together with its distribution and project partner IBC SOLAR. The PV specialist based in Germany supported the engineering and installation with its over 30 years of experience in solar systems of any size. The joint effort has resulted in a high quality installation that produces clean solar energy for decades.